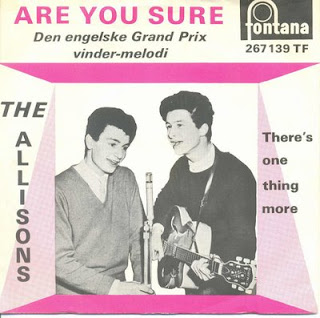 Golden Oldie Are You Sure is one of the songs I knew by heart (although in my own invented variation on English) before I found out it actually was a Eurovision tune.
The Allisons (Brian 'John Allison' Alford & Colin 'Bob Allison' Day, not really brothers contrary to popular belief), the U.K.'s answer to the Everly Brothers, scored a European hit with their Eurovision runner up, the third U.K. entry in a row to finish 2nd.

Despite their European hit, world domination didn't really happen for the Allisons. They managed to get two more top 40 hits (but not top 30) and called it a day in 1963.
'Goodbye, Farewell.... Are You Sure?' they asked. I guess they weren't, as the Allisons reunited on several occasions and in the 70's recruited some new brothers like Mike Allison and Tony Allison.
John White, earlier member who left in 1959 is the real composer of their Eurovision Song. (It's credited to The Allisons)

Search engines aren't much use when you're browsing with a general term like "Are You Sure" but over the years I have found details on about 40 versions of the song and here are some of them. 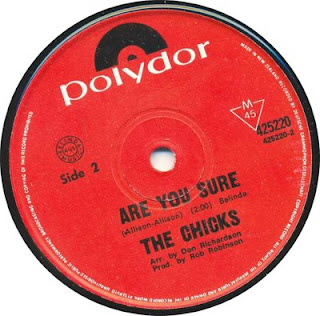 My favorite first: The Chicks are a New Zealand sister duo formed by Judy & Sue Donaldson. (real sisters) The single was sent to me by Barry from New Zealand, long before the internet and all that and it has always been one of the treasured little gems in my collection.
Are You Sure is the b-side to the 1969 single Miss You Baby (Polydor 425220).
-
I could write/copy/paste the girls life story, but instead I recommend this excellent bio at New Zealand Music with gorgeous pictures and very detailed info. 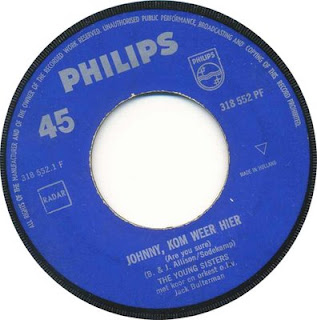 Another sister duo, The Young Sisters (again, real sisters) from the Netherlands recorded Are You Sure in Dutch.

Johnny, Kom Weer Hier (Johnny come back) was recorded in 1961 and released on single (Philips 318 552 PF).
The Young Sisters are Willy & Nelly De Jong, mom & aunt of Maxine. Maxine represented the Netherlands in Eurovision in 1996 with Franklin Brown (De Eerste Keer, 7th).
Even though the Sisters released several singles covering international hits, they never scored a chart hit. But they prooved to be a popular live act performing for Dutch soldiers abroad, often accompanied by the Jumping Jewels.
There is a short bio with some great pictures here at the West Brabants Rock 'N' Roll Archief (in Dutch). 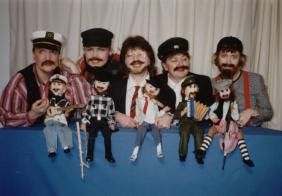 German versions of the song are called Ahoi-Ohé and it is this version that probably was the inspiration Kalmer Tennosaar & Kalju Terasmaa to record an Estonian version. That version was covered by Estonian girl-folk-humpah band Seelikukütid.
The girls of Seelikukütid have been known to sport the Sebastien Tellier look and tackle popular songs as well as tradional songs on their many albums.
Ahoi Ohee is from the CD Seelikukütid 4 from 1997. Seelikukütid also recorded Puppet On A String (as Hüpiknukk, on CD Seelikukütid 5)

A List of Are You Sures
List of versions of Are You Sure . (e-mail me) This has release details on the Allisons versions and info on 42 coverversions of the song. (Word document uploaded with 4shared) (Updated November 2013)
Any corrections, additions and comments are of course very welcome.
Posted by Eurocovers at 1:49 PM

Labels: Are You Sure, the allisons, The Chicks, Young Sisters