In the mid 90's the United Kingdom was really on a roll with 4 brilliant and succesful entries in a row from 1995 to 1998.
Ooh, Aah, just a little bit by Gina G was a worldwide hit even though it only ended 8th (due to Gina G catching a cold in that skimpy dress of hers).
Ooh, Aah is the biggest US hit for a UK entry and a top 10 hit in Australia, Gina G.'s homecountry.
Seemingly silly with the Ooh's and Aah's, it's a genius slice of Pop every charthit writer wished they had written.
And of course there was ridicule like The Wurzels Oo-Arr, A Dutch Telekids version, A Smurfs version and a completely undeserved Jive Bunny make-over.
But here's a great example of a fitting tribute just the way we need them! 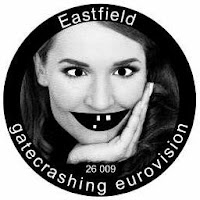 Eastfield released their version on a split 7" inch single in 2004 (Baszdmeg 26008) and a year later two versions on a cds/EP Gatecrashing Eurovision. (Baszdmeg 26009)
They call it Urban Rail Punk, I call it fab! 10/10 for the song and 26/10 for the sleeve! ----------
-
The 7"single is still available at Eastfields website in red, green or black vinyl (click orders) but the cdsingle is sold out.
And if you prefer some Ukelele Ooh's and Aah's here's a Youtube for you.-
-
-BLOG TIPS:
Some Eurovers Stuff From All Kinds Of Blogs:
You can find a video of an Esperanto coverversion of Sanomi (Vi Kaj Mi) (Belgium 2003, runner up by Urban trad) at Francis Soghomonian's video page.
Yayo Salva Musical is worth browsing for some great old EP's including interesting San Remo releases.
New blog Musical Interval has a nice 60's Paul Mauriat LP featured including two Eurocovers.
Boppeslag features The 50 Foot Combo who cover the 1969 Belgian entry Jennifer Jennings (Louis Neefs)
Posted by Eurocovers at 10:33 AM No comments: 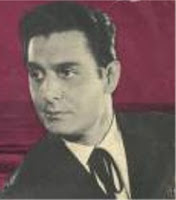 Greek born Eurovision singer Jimmy Makulis has died.
He was the first Greek singer on the Eurovision stage when in 1961 he entered for Austria in 1961 with the song Sehnsucht (Desire). That song is one of the rare missing songs in anyone's Eurovision record collection, as it's one of the unfound records of which no release is confirmed. 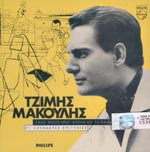 Even though Makulis enjoyed popularity in Greece his biggest successes were in Germany in the late 50's and early 60's. In 1966 he tried to break America which resulted in working with Duke Ellington and appearing on the Ed Sullivan show and playing Las Vegas. It resulted in one minor US radio hit Happy Heart (written by James Last). In the 90's Makulis toured Germany again and appeared in many TV shows.

Jimmy Makulis recorded two Eurocovers, both released in 1971.
Love is blue (L'amour est bleu, in English) can be found on the 1971 LP With Love (Hippo Records).
He also recorded a Greek version of Severine's 1971 winner for Monaco, Un Banc, Un Arbre, Une Rue : Μια καρδιά χτυπά (Mia kardia ktipa). I don't have any details on the original release but the song was issued on CD Τα Ερωτικά του '60 & '70 in 1996 and το ελληνικο τραγουδι in 2006.

Posted by Eurocovers at 8:56 AM No comments: 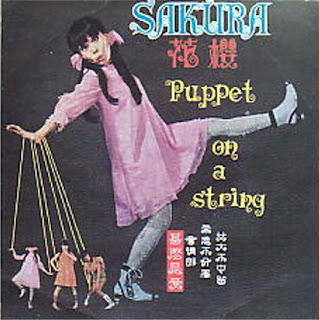 In the Eurocovers posts celebrating Sandie Shaws anniversary year I have featured fabulous Mandarin Chinese versions of Puppet On A String by Lara and the Trailers ( 櫻櫻) and by Betty Chung ( 鍾玲玲) and I asked for the third known Chinese version by Sakura Teng (櫻花) & The Quests*.

Well, no need to look any further, there is a great bit of Sakura Teng audiobilia to be found at WFMU's Beware Of The Blog. You can find Puppet On A String along with classics like My Boy Lollipop, Stupid Cupid and the Beatles' Michele. Go there!
The same blog has more Eurocovers related stuff here with another Puppet and Congratulations by some Dutch postal workers. English with A Dutch accent at its best.
You can also find Esperanto singer Alberta Casey there, including her version of Domenico Modugno's Volare + a very interesting Maltese LP by Joe Cutajar, Once the Joseph of Helen & Joseph, Malta's first ever Eurovision stars from 1971. And many many many weird and amazing audiogems.
Many other versions of Puppet On A String from all over the globe can be found here (links)
The Quests* also recorded 1967 Luxemburg classics 'L'amour est bleu'.
Posted by Eurocovers at 11:39 AM No comments:

Labels: 1967, Puppet on a string, Sakura Teng, Year of the puppet 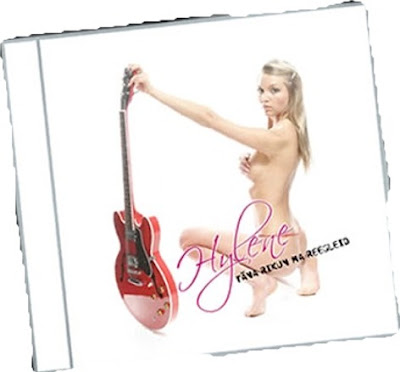 Estonia, look no further, your singer for Eurovision 2008 is Hylene. I have no clue who she is (Idol?), but her album Täna Rikun Ma Reegleid is stuffed with high tempo pop-disco-techno (think Cascada) that wouldn't be out of place on the Eurovision stage. Highly danceable but also a good collection of Tunes.
I have a feeling that going Pop the big way is the way forward for Eurovision which more and more drowns in ethnic drum parades and pseudo rock balladry. Hylene will do the job for Estonia.

Although her dress-code won't be acceptable for the EBU (Big Giant Head of Eurovision) but that's nothing that can't be handled with. 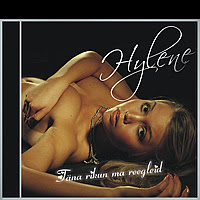 The album is a collection of 11 songs in Estonian plus You Came, a Kim Wilde cover in English. Add a few remixes as a bonus and it's 15 tracks in total.
And this is Eurocovers, so there's a Eurovision song too. It's Keelatud Maa (Forbidden land), originally sung by Estonian Pop Angel Maarja (Maarja-Liis Ilus), the best pop voice in the world. It's a fitting tribute to the 10th anniversary of the song, which reached the 8th place in the Eurovision Song Contest in Dublin in 1997.
Another coverversion on the album is Taevas Ja Maa, a fine pop song we all know and love as Heaven Is A Place On Earth (Belinda Carlisle's signature tune).

At Hylene's homepage you can listen to some more songs (Click Laulud) including the titletrack which is also the new single.
If you want to hear the original version try this videoclip at Youtube.

UPDATE 01-12-07: Estonia has announced the shortlist for the national selection and there's no Hylene. tssss...., they just don't wanna be in the final do they?
Posted by Eurocovers at 12:56 PM No comments: 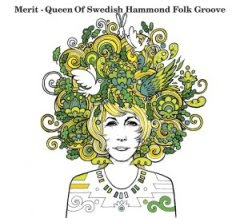 Instrumental covers can be a bore and often I don't really understand what actually is the purpose of releasing them on record. But of course the exceptions make the rule and the following instrumental versions of 60's Eurovision entries are just plain groovy. Groovy, for those younsters not familiar with the word, it's dated slang for Cool, Neat, Interesting. To me it means 'swinging your ass off'.

The Hammond organ is a popular keyboard instrument with endless possibilities, but often the Eurocovers on the organ (and there are hundreds) are of the cheesy variety.
But not so Merit Hemmingson, Swedish key-magicienne. Her Hammond antics are the most swinging you'll ever hear.

Debut LP Merit Hemmingson and the Meritones at the Esquire Club (Sonet T 7656, 1967) features an odd collection of popular songs putting a pop song like Sandie's Shaw's Always Something There To Remind Me against a funky jazz Watermelon Man.
And then there's New Fashioned Waltz. It's a version of the jazzy Swedish Eurovision entry of 1966, Nygammal Vals, written by Bengt-Arne Wallin. Even though Merit Hemminsons interpretation is instrumental it's worth mentioning that the lyrics (by Björn Lindroth) are some of the weirdest ever written in Eurovision history. There's a hip pig breeder, a prudish princess and some saucepan banging. You can check them (and translation in English) out at the site for Eurovision lyrics The Diggiloo Thrush. 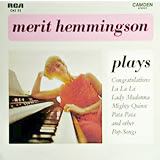 There's some more serious toetapping and finger snapping to be done with Hemminsons second LP, Merit Hemminson Plays (RCA Camden YSJL-1-547, 1968). It's another collection of hits like Lady Madonna, Mighty Quinn and A Banda. And it has two Eurocovers.
Massiels 1968 winner La La La opens gentle and slowly but you just can't sit still once the beats kick in. Cliff Richards runner up of the same year, Congratulations, gets the groovy hammond treatment laced with some funky sax.
You can find more details about this second LP and its personel here at the Sabu Martinez website. 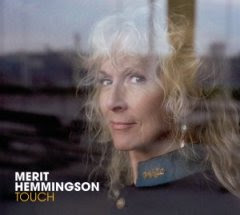 Today Merit Hemmingson mainly focusses on folk music and she has issued several CDs in recent years (check her MySpace).
In a 40 year career she has released 20 albums (so far), the most recent being Touch of 2006.
In 2005 a compilation of 70's tracks was released at the initiative of Merit fans/Eurovision stars The Ark: Merit - Queen Of Swedish Hammond Folk Groove (Bonnier-Amigo AMSCD 111).Both Merit Hemmingson CDs are available from CD-ON and other sources. The early LP's have not been issued on CD (yet).
-
Merit Hemmingson Homepage and MySpace and a Youtube video for 2006 song Halcyon Days. 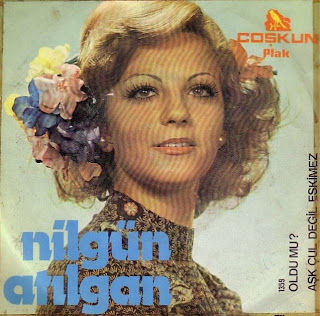 Here's some additions to Waterloo in the top 10 most covered Eurovision songs.

A rare version of the 1974 Eurovision classic I had been looking for for a long time is the Turkish version by Nilgün Atılgan. Most known as an actress, Atılgan released several records including this single Oldu mu? (Waterloo) on the Coskun label. (Coskun plak 1359)

Roymond.com presents an odd version of ABBA's Eurovision winner Waterloo features a mini Abba sample, cats and a disturbed vocal. Think The Colourblind James Experience meets Vincent Price. In a washing machine. You can get the track here.

An even more impressive version in the weirdness stakes is the version by Phil Granville you can find at at Dictionaraoke.com. Loving the wow wow wow's at the end.
"This site features parodies of popular songs using karaoke-style backing music with vocals provided by audio pronunciation samples from online dictionaries". Many other great classics get the Dictionaraoke treatment. 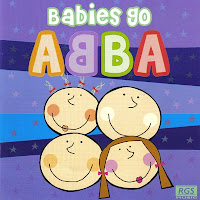 And I didn't want to let you hear this one (for your own good), but I can't refuse a request that is accompanied with praise and kisses.

BLOG TIP:
Funky Czech In has a nice feature about Blue Swede, band of Eurovision singer Björn Skifs (Swedish entries of 1978 & 1981). Blue Swede preceded Abba by being the first Swedish act to top the US charts (1974 - Hooked on a feeling).
Posted by Eurocovers at 8:02 AM No comments: 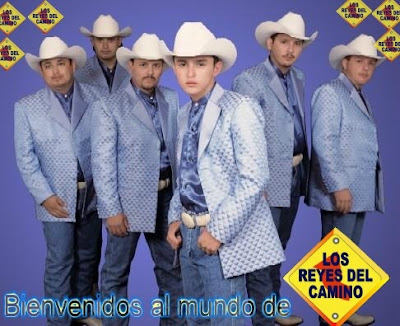 I have many soft spots, one is for Mexican Cowboys preferably doing Eurovision covers.
The track featured today is the 1971 Italian entry l'Amore E Un Attimo originally recorded by Massimo Ranieri. Ranieri's Spanish version Perdón Cariño Mio was covered by Los Reyes Del Camino on their 1997 CD Asi Es La Vida (Disa/Universal 2020028) and it's a heartfelt rendition of a song oozing with love and sorrow. If you don't know the original I recommend you watch it at YouTube and prepare to melt.

---
The boy in the front is Tito (Gilberto de Jesús Rodríguez Guardiola) who joined 2 years after Perdón Carino Mio was recorded.
After Tito joined the Reyes got the attention of a whole new audience (i.e. 15 y.o girls) and they got their first 100.000 selling CD. 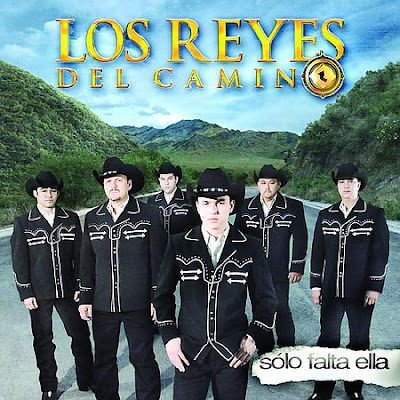 The Kings Of The Road have a new CD out now titled Sólo Falta Ella (Disa/Universal 2107620), with a more adult Tito, a more rockier sound and the men dressed in serious black with the appropriate sturdy faces on the cover.
You can hear songs of the new album at the Los Reyes Del Camino Myspace. The Tito and Los Reys Del Camino MySpace has some older songs.
There's a few video's of the band at Youtube in which they show a wide range of Mexican cowboy fashion must haves. All tormented little soap opera's with many girls, but young Tito never seems very happy.

Another Mexican version of the song was recorded by Estela Nuñez. I don't have details on the original 70's release but it can be found on several Estela Nuñez compilation CDs.
Posted by Eurocovers at 8:17 AM No comments: