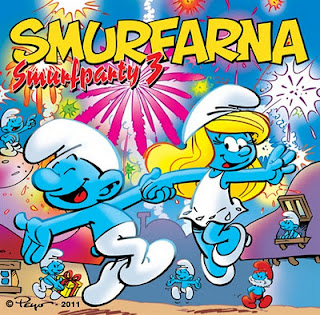 Here's a shopping tip for the kids, just in time for the Christmasjul:
Having barely recovered from their multi million grossing movie theatre success the little blue guys (+1 girl) in the white pointy hats are at it again.
The Smurfs (or Smurfarna in Swedish) have recorded a Swedish version of Popular for their new album Smurfparty 3.
They call the song Populär. Also on the same album is a version of the Norwegian entry Haba Haba, now titled Bada Bada.
The album is out on Warner / Metronome on december 7. (WMS-5052498-980826)

The same two tracks can be found on their new Norwegian album Smurfeparty 3 (as Smurfene). Popular becomes Populær and Haba Haba is now Dans Meg Til Smurfeland. (Warner 5052498981021)

Since the little critters are cunning multilinguists they also recorded a Danish version Populær for their new Danish album Smølfeparty 3 (as the Smølferne) but that one doesn't have Haba Haba. (Warner Music Nordic)

Eric Saade's Popular and Stella Mwangi's Haba Haba were the 2011 Eurovision entries for Sweden and Norway respectively.
(links will take you to the Düsseldorf Collection pages)
Some Smurftastic Eurocovers of the 2009 and 2010 contest are documented here also featuring some smurfing oldies.
Posted by Eurocovers at 1:49 PM No comments: 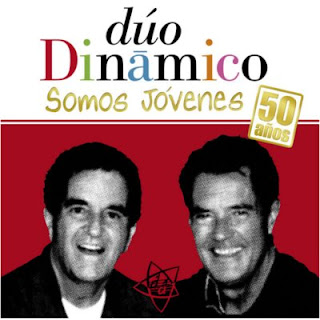 Here’s some info on a new CD album by Dúo Dinámico, just released last week.
The duo are Manuel De La Calva and Rámon Arcusa from Spain and they have been at it for 50 years now, hence the albums title: Young for 50 years.
Somos Jovenes 50 Años is a collection of newly recorded duet versions of songs from the rich Arcusa / De La Calva vaults. Of course it includes their much debated 1968 Eurovision winner La La La in an interesting new version.

At Eurovision the song was performed by Massiel after the original choice singer Joan Manuel Serrat was axed for wanting to sing in Catalan. (more about that here).
Dúo Dinámico have now recorded La La La with Serrat. The first part of the song is Serrat singing in Catalan, the second part is the duo singing in Spanish.
Perhaps not the best version of the song, but an interesting version for the die hard fans and collectors.

The CD is out in Spain now and also available digitally at Los Tunos. The CD version comes with a DVD with a 'making of' the Somos Jovenes documentary and rare archive material in which they undoubtedly sport many of their attractive trademark sweater vests. 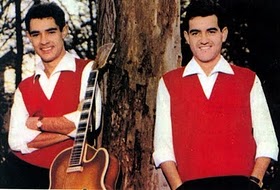 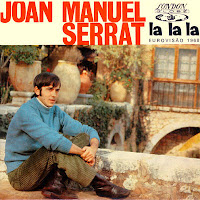 Title track Somos Jóvenes is a 1962 hit for the duo. Quisiera Ser is also the title of a 2007 musical built with 24 songs of the dynamic boys in Mamma Mia style.
Como Ayer from 1966 is one of their many contest winning hits, in this case the Mediterranean Song Festival.
In the early seventies they more or less stopped recording and focussed on writing and producing for other artists.
In 1968 the duo recorded and released La La La themselves (as Manolo y Ramon) ♫ 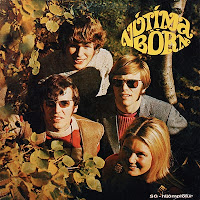 Special thanks to José Antonio
Some older La La La posts at Eurocovers:
Norwegian with Kirsti, Oddvar and Arne.
Icelandic with the modern kids of Nútímabörn.
La La La and I'll Cry If I Want To with Lesley Gore.
Estonian with Leelo Karp.
Posted by Eurocovers at 11:49 AM No comments:

It's blue and it's a single!


German noisy jumpers Scooter recorded C'est Bleu for their new album The Big Mash Up. They got a little help of Eurovision Royal Vicky Leandros, the original singer of L'Amour Est Blue. 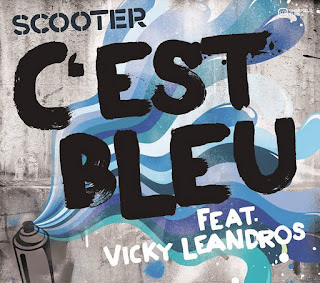 The 1967 song, a.k.a. Love Is Blue only ended 4th in the contest, but it became an evergreen. Although several other versions stole Vicky's thunder.
But she's making up for that with a vengeance:  the Scooter/Vicky track is released as a cdsingle (and download of course) and ít will be a smash hit. It's out on the Sheffield/Edel label in Germany.
And above is the official video which is from the Scooter Youtube channel.

BeaRecords sells the 2-track cdsingle which also features the Dubstyle remix of the song.

Love Love Love
Eurocovers loves L'Amour Est Bleu a lot (and so do many of you) so there have been several posts since the very first Eurocovers piece on Paul Mauriat and his re-invented 2nd version of the same song.
Check out these:
10.000 coverversions: #2 most covered Eurovision song with The Dells, Liberace and the Amazing Dorothy Ashby.
Little Tempo ft Yoko Futita.
Love Is Blue special with The Pees, Moony and of course Barbara Y Dick.
Thank you India, versions in Hindi and Telugu
Ann Margret or not?
Funky bagpipes: Rufus Harley (if you only check out one....)
Rouge Hot from China
Yvetta Simonova
Åse Kleveland
Disco Colors (tubeclip only) 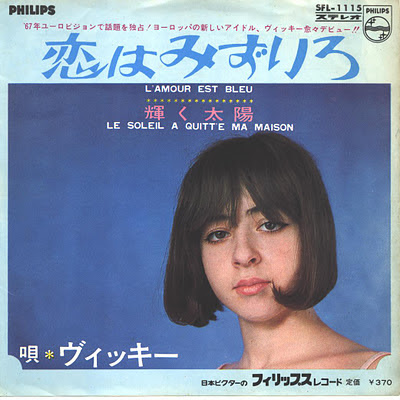 Posted by Eurocovers at 4:22 PM No comments: 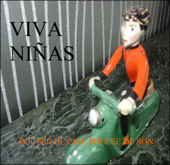 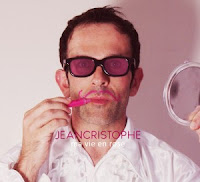 And here's another cover of the Serge Gainsbourg / France Gall classic. Less cheery-uppety than the Niñas, but equally lovely.
This track is from an album that is scheduled for release on Valentines day 2012: Ma Vie En Rose by Jean Cristophe.

Posted by Eurocovers at 11:57 AM No comments: