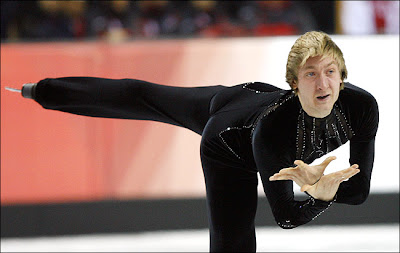 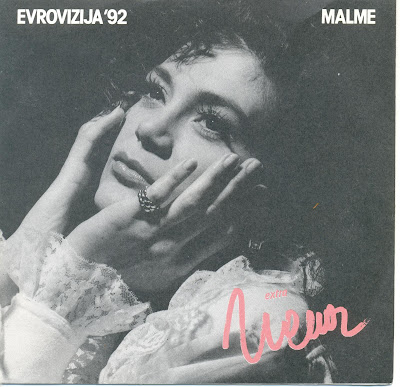 Ljubim Te Pesmama (I love you in my songs) by Belgrade born Extra Nena was the last Eurovision entry for Yugoslavia.
But when the song was selected in the national final Slovenia, Croatia, Bosnia-Hercegovina and Macedonia* had already declared independence. So the national final was organized by Serbian TV only, even though some Bosnian artists and songwriters participated. (see the first Belgrade weeks post for some more info).
Ljubim Te Pesmama starts as a melancholy ballad but bursts into full blown Balkan Schlager in the refrain. Extra Nena recorded it in Serbian, English, French and Italian. The song finished 14th in the competition in Malmö, 1992.
http://www.extra-nena.com/
* later officially known as Former Yugoslavian Republic Of Macedonia, I know…. 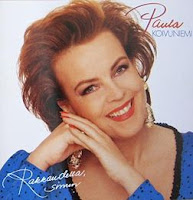 Two artists covered Yugoslavia's swan song. (as far as I know)
A Finnish version Miksi Luokesi Jäänyt En was recorded by Paula Koivuniemi who released the song on a single (Fazer Finnlevy 100302) and on the LP/CD Rakkaudella Sinun (Fazer finnlevy 200311/312, 1992) 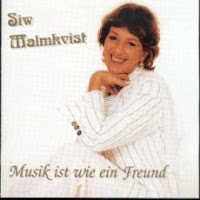 Eurovision star Siw Malmkvist recorded Ljubim Te Pesmama in German and in Swedish.
The German version Ein Hauch Von Florenz can be found as an extra track on cdsingle Geh Nicht In Den Rosengarten and on CD Musik Ist Wie Ein Freund. The title track of the album is a German version of the Croatian 1995 entry Nostalgija. (by Magazine & Lidija). (Both cdsingle and album on the Funny Artists label, 1999)
Swedish version Ge Mej En Doft Ifrån Rom was released on a very rare cdsingle by Siwan & Sivan (Siw Malmkvist & Siv Wennerberg) issued on the Debit & Kredit label (DK-001). This cds also includes a cover of Nostalgija (as: Musik Är Ingenting För Dej, in Swedish)
Siw Malmkvist represented Sweden in 1960 with Alla Andra Får Varann (10th place) and Germany in 1969 with Primaballerina (9th). You can read more about Siw Malmkvist and her Eurocovers in the Year Of The Puppet Post Siw Malmkvists Sprattelgummas 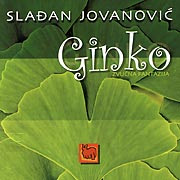 ANNO DOMENICO meets BELGRADE WEEKS
I've been trying to locate a Serbian version of Volare to tie in with the Domenico Modugno year, but I haven't found any sung in Serbian which is actually by an artist from Serbia. But here's an interesting one in Italian. Multi instrumentalist Slađan Jovanović recorded a mellow bossa-version of the song as a bonus track for his album Ginko.
And you can listen to / download all tracks from the album at his website at http://sladjan.net/. Volare is track 14.
Posted by Eurocovers at 3:28 PM No comments: 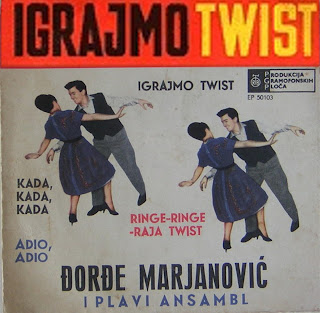 Đorđe Marjanović is a Serbian pop singer, who was and is one of the most popular singers in Yugoslavia. Đorđe was also very popular in the USSR where he released many of his songs (On Melodia of course).
Big hits were Zvižduk U Osam, Romana and , Devojko Mala.
He recorded many international hits in Serbian ranging from Italian classics like Quando Quando Quando, Roberta and Lazarella, Rock'n'roll hits like Speedy Gonzales, Hello Josephine and If I Had A Hammer to to pop hits like Bang Bang, Sympathy and Emma (the Hot Chocolate song).
In 2004 he said goodbye to the stage with a farewell concert in Belgrado in the Sava Centar, now home to the Eurovision 2008 press center. 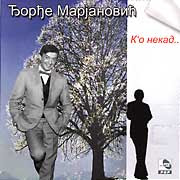 In the 60's Đorđe Marjanović participated in the Yugoslavian National Finals with at least 5 songs, representing TV Beograd (Serbian TV) except.
His best result was a 3rd place in 1968 so he never made it to the Eurovision stage.
Đorđe Marjanović National selection songs:1961 - Reč Il' Dve
1965 - Stari Kraj
1965 - Proletni Vetre
1966 - Najlepši Dan
1968 - Ne Verujem Ti Više
(Beograd is Belgrade, Serbia)

http://www.djordjemarjanovic.com/ is a good website about the singer. It's in Serbian but still worthwhile even if you don't read the lingo. Great pictures and some nice audio's.
Posted by Eurocovers at 3:46 PM No comments: 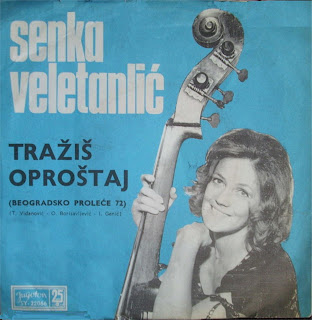 In the weeks leading up to the 2008 Eurovision Song Contest in Belgrade, Serbia Eurocovers digs deep to find some related Eurovision coverversions.
I must confess it's not easy to find many Eurocovers linking to Serbia. The Serbian entries from Yugoslavia have hardly been covered and my collection has many gaps (see below).
But here's a sweet one from the 70's. The song Mi Znamo Sve is by sisters Senka & Bisera Veletanlić and it's a coverversion of the Netherlands 1972 entry by Sandra & Andres: Als Het Om De Liefde Gaat (When it concerns love). The chirpy nanana song was a popular hit back then and was covered in at least 10 languages.
Mi Znamo Sve was released on the b-side of the Senka Veletanlić single Tražiš Oproštaj. (Jugoton SY 22066) 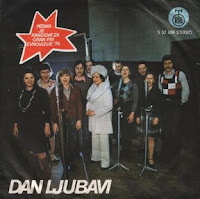 Bisera Veletanlić appears on the single Dan Ljubavi, which is a coverversion of Yugoslavia's 1975 entry Dan Ljubezni, originally by Pepel In Kri (Ashes and Blood on their English releases). That entry is of Slovenian origin and is sung in Slovenian, but a Serbian version was recorded by Bisera Veletanlić, Nada Knežević, Beti Đorđević and other singers. (RTB S 52 659).

WANTED
There's probably a lot more Serbian coverversions than I know about, but here are a few I'd really like to hear. If anyone can help Eurocovers with any of these songs or other surprises I'd be ever so happy.

Tom Tom by Daliborka Stojšic. It's a version of the 1973 Finnish entry which was released on a b-side of a single (Jugoton SY-22536). Daliborka was Miss Yugoslavia 1968 and reached the semi final of Miss Universe that year (pictured left).

Filip Zmaher - Moja Generacija - This is one of the very few covers of the Serbian Yugoslavia entries I know of. It was only released on a cassette (MC) dedicated to original composer of the song; Kornelije Kovac. The MC is titled Kompozicije Kornelija Kovaca iz TV "Zvucna Viljuska".
Posted by Eurocovers at 8:29 AM 1 comment:

Yep, Eurobandið time again, This Is My Life, album out now!! 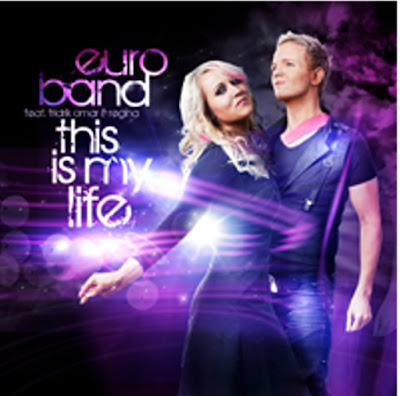 Eurocovers favorite Eurobandið* have released their debut album and it's a real treat for Eurocovers fans. The Second Best Band In The World (after BWO of course) release their CD This Is My Life with 11 tracks including the Eurovision 2008 entry with the same title.

The album also has a remix of the Icelandic contender, some great Eurocovers and other songs of interest.

Don't leave without me now = Ne Partez Pas Sans Moi, Celine Dion's winner from 1988 (for Switzerland).
A ba ni bi - Israels 1978 winner.
Hold me Now - Johnny Logan's second victory for Ireland in 1987
By Your Side = the english version of Regína Ósks Þér við hlið, preselection song from 2006
Fire = Eldur, Fridrik Omárs solo pre-song from 2007
Thinking of you = Fridriks solo song from 2006 Það Sem Verður
Við sigrum að ári! - Making your mind up, Tha' Fizz's winner (U.K. 1981).
In My Dreams is the most interesting cover of all . The Norwegian rockers' Glam hit (9th in the 2005 contest) now is a smoochy love ballad.

Unfortunately, the Icelandic version of This Is My Life is not on the tracklist. So no perfect 10 then.

Excerpts and full tracklist of the album here at Tónlist. And you haven't seen the official video yet, there's a YouTube here, and it's fab. 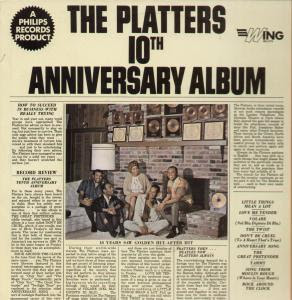 I noticed that the Platters entered the U.K. album top 10 this week with a Best Of compilation. And as I had prepared a bit on their Volare anyway, what better time to post it than now.
I don't know what triggered this new interest in the U.S. vocal group, but it's remarkable for a group that was founded 55 years ago that people still go to the shop and buy their records.
Their most known hits Only You, The Great Pretender, My Prayer and Smoke Gets In Your Eyes were all recorded in the 50's but their version of Nel Blu Dipinto Di Blu (Volare) is recorded in 1964. It was released in Januari 1965 on the LP The 10th Anniversary Album.

The Platters had numerous line up changes and by 1964 they had run out of hits. The 10th Anniversary Album didn't change their fortune.

Volare doesn't feature all members from the early golden era; Buck Ram, female singer Zola Taylor and lead singer Tony Williams had left by then and each formed their own Platters.
Later even more ex-members toured with groups under the Platters banner
It was the Buck Ram Platters with a new line up that had a short run of hits with their 1966 & 1967 revival.

The line-up on Volare and The 10th Anniversary Album includes Sonny Turner, David Lynch, Paul Robi, Herb Reed and Barbara Randolph. Herb Reed, the only original member still tours as Herb Reed and the Platters. Herb Reed is the only member who features on all official Platters recordings. The LP includes The Great Pretender and covers of hits like Love Me Tender, Don't Be Cruel, Rock Around The Clock and Song From Moulin Rouge.
The Platters' Volare is a light cha cha exercise with a little parlando intro treasure.

The new compilation The Very Best of Platters is out on Universal Music TV (UMTV 7944) in the U.K. and features 20 tracks. Other albums have been released in the past with the same title.

Sources: A lot more on Platters line ups, Platters groups and discography is at the Platters Info Site or check out the Herb Reed & The Platters homepage. 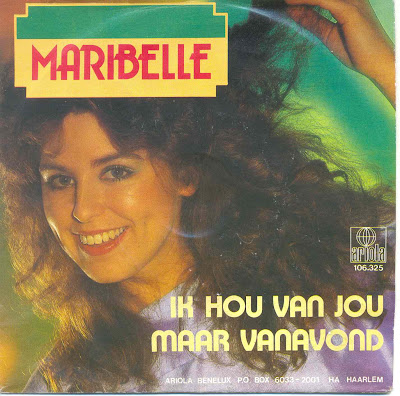 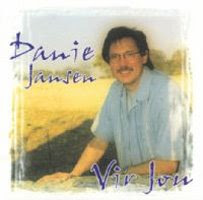 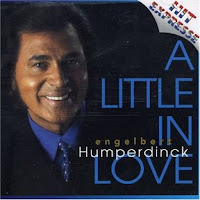 Cilla and Engelbert
And then there's some well known singers who recorded the song. Engelbert Humperdinck released it on his CD A Little In Love (as In Love With You). Cilla Black recorded it as A Dream Come True on her CD Through The Years (1993) and earlier mentioned soap actor John McCook released In Love With You on his CD Bold And Beautiful Lovesongs.

Posted by Eurocovers at 11:01 PM No comments: