The Dutch Meet The Danish - Dansevise by Streetorgan De Turk 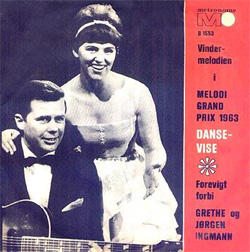 Dansevise is the Danish Eurovision winner from 1963 that became an evergreen even outside the Danish borders.
The song by Grethe and Jörgen Ingmann has survived over 40 years and I hope there will be a place for it in the 2014 Copenhagen contest. Here's Dutch organ De Turk playing the song in the streets.

List of Dansevises
Listfans: The Dansevise Document is here. It includes details on the versions of the song recorded by the Ingmanns and also a list of 85 coverversions of the song with release details. It's a word doc and uploaded with 4shared. If you can't use 4shared, just send an e-mail.

Big thanks to the filmer / YT uploader of the wonderful 'draaiorgel' clip.
More Dansevise at Eurocovers
Check out The Copenhagen Collection for all the releases, CDs, versions, charts and other goings on of the 2014 Eurovision hopefuls. ---
Posted by Eurocovers at 8:06 AM No comments:

It was 40 years ago today, ABBA won the Brighton Eurovision with Waterloo.
Four decades on ABBA's music is as relevant as ever.


ABBA - Waterloo 40 - releases.
We all have the songs, bought them several times on singles, LP's and CDs, but still the host of festive releases celebrating the 40 years of Waterloo are making me greedy.
Sadly there is no unreleased material included and of course the ABBAs have enough money, but I might just buy one or two items to celebrate.
Here's a few that might tickle your fancy.

Picture Disc
- A 7" inch picture disc with Waterloo in Swedish and English will be released on April 6 in Sweden. A similar issue will be released in other countries to celebrate Record Store Day (April 19)

Waterloo: The Album
- April 6 is also the release date of the special edition of the Waterloo album. It will include 8 bonus tracks including all the versions of Waterloo that were ever released. Also the US and UK remixes of Ring Ring are included.
The set comes with a DVD featuring several TV performances including the two Eurovision versions, two MF versions, the preview version and two TOTP performances of Waterloo.


40 singles box
- If you really want to splash out there is a box with 40 vinyl 7 inch singles out on the 5th of May.
Next to the 31 singles that were originally released in Sweden there are 9 international singles including the German and French Waterloo’s, Spanish language Chiquitita and I Have A Dream, When All Is Said And Done (as released in Australia) and Lay All Your Love On Me, originally released on 12 inch maxi.
The sleeve and label of each single in the box set are exact replicas of the original issues.
Only the 9 singles not originally released by Polar Music have been given new Polar labels, corresponding to the design used by Polar during the era when each single was released.
It's a severely limited edition, although no numbers are specified.
Retails at a mere € 220,- to 300, -.
See full track list below.

ABBA Gold Superdeluxe
- April 6 also sees a 3 disc edition of ABBA Gold, featuring the original ABBA Gold and More Gold CDs plus a third disc with tracks that have appeared as b-sides to the various single releases. 59 tracks in all, but maybe the least interesting release of the bunch. 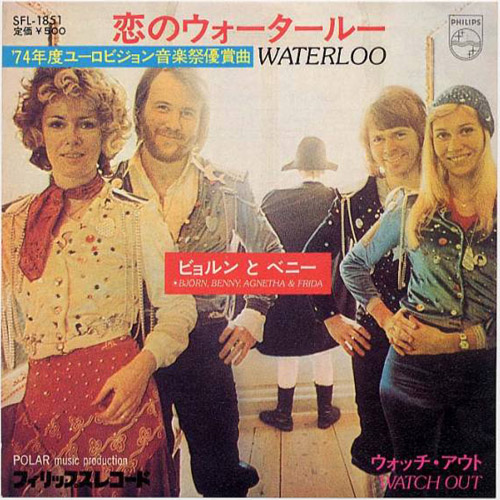 ABBA 40/40 Japan
ABBA's career in Japan, like many western popstars' was at least patchy. Some of the big international hits didn't do very well, while some others, some Japan only singles were more successful.
Björn and Benny also has some success in Japan before the girls were ven mentioned. She's My Kind Of Girl and Love Has It's Ways were hits in various Japanese charts in 1972. It resulted in the release of some very early ABBA singles like I Am Just A Girl and Another Town Another Train.
In Japan the Anniversary Of The Year is celebrated with a 2CD ABBA 40/40 with 40 songs selected by Japanese fans in a survey held last year. Out since March 26. Some surprising choices there, Tiger, Our Last Summer, Hey Hey Helen, Move On, but the pre-Ring Ring oldies are not included.

Thanks to Jean-François and to Fernando.
Parts of this article have been featured previously on our facebook page

Posted by Eurocovers at 7:42 AM No comments: