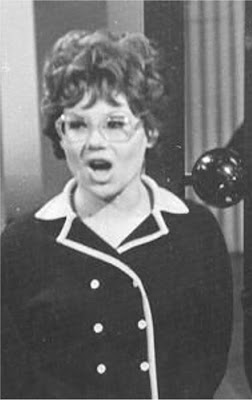 This week, on February 16, Estonian singer Heli Lääts passed away.

Avid Eurocovers readers may have noticed I'm a bit of a fan since I discovered her impressive list of Eurocovers.

Most of this article is from Januari 2007 from the Year Of The Puppet series (About coverversions of Sandie Shaws Puppet On A String).
I changed a few things and moved it up as a little tribute to the legendary Estonian singer.
Heli Lääts was 85.

from the 2007 post:
Hüpiknukk
Puppet On A String comes with a variety of titles in different languages. There's Sprellemann and Sprattelgumma, Paprikajancsi and Sätkynukke, and they will all be featured here in the Year Of The Puppet.

My favorite title for Puppet On A String is Hüpiknukk. Try saying it 10 times in a row, and fast.

Hüpiknukk is the Estonian version of Puppet On A String and this one is by Heli Lääts, one of the most popular Estonian singers from the 60's and 70's.

Heli Lääts has recorded many coverversions of international hits since the late 50's and most of her work has been released on cd in the past years. Another singer that would have graced the Eurovision stage very well if only….. 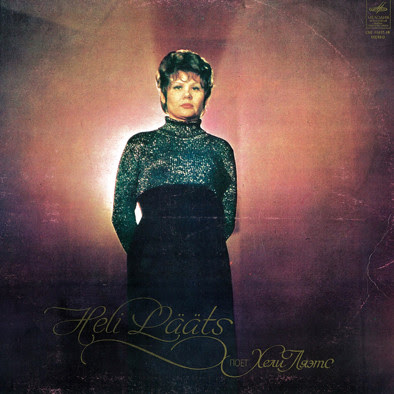 In addition to the ones mentioned above there are a few that have been released digitally in recent years. 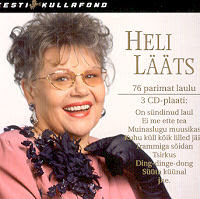 Tracks marked * can also be found on the CD Unustamatu Eurovisoon, a compilation CD from 2002. It features 22 Eurovision songs covered in Estonian, dug up from the vaults to celebrate the Contest being held in Tallinn. (Hitivabrik, 2002)

Kaunid Balleriinid was also released in a remixed version by DJX on a 12"inch vinyl and DJX CD Tähesadu DJX Episood 1. He mixed the song with Spillers Groovejet minus Sophie Ellis Bextor

Links and sources
ERR/ETV news
Heldur Karmo net - A website which lists all songs translated by Estonian lyricist Heldur Karmo
Unfortunately no Heli Lääts at Spotify, but you can find some Audio's at Youtube.
Posted by Eurocovers at 4:56 PM No comments: 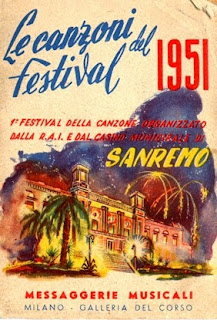 Sanremo is 68 by now, but I just noticed this 4CD album with coverversions of all 65 winners from 1951 up to 2015 of the Mother Of All Songcontests, the Festival Della Canzone Italiana di Sanremo.

The first Sanremo festival was in 1951 and Nilla Pizzi won with Grazie Dei Fior.
Sanremo quickly became a successful stage for Italian singers and songwriters.
The Eurovision Song Contest which premiered in 1956 was modelled on the Italian music spectacular.
The Sanremo festival became closely connected to Eurovision straight away: The winner of Sanremo went on to be the Italian Eurovision entry from 1956 to 1966.

In 1967 things changed. Sanremo winner Non Pensare A Me by Claudio Villa was disqualified because the new Eurovision regulations ruled the song had been released too early. It was replaced by Non Andare Piu' Lontano after the Eurovision rehearsals started.
After that the actual Sanremo winner only went to Eurovision on four occasions.
Sometimes the Sanremo winning artists would pick another song or someone who ended lower on the Sanremo table represent Italy in Europe. In the 70's and 80's the Eurovision choice was often Sanremo unrelated.

To celebrate the 65th anniversary of the Sanremo contest a 4CD was released by Azzurra Music in 2016. It includes all Sanremo winners recorded by new, young and upcoming artists. 15 of the 65 songs are Eurovision entries.
The 4CD is still available at Azzurra Music, but for you digital youngsters, it's also available through your favorite mp3 outlets, or if you're broke, Spotify. 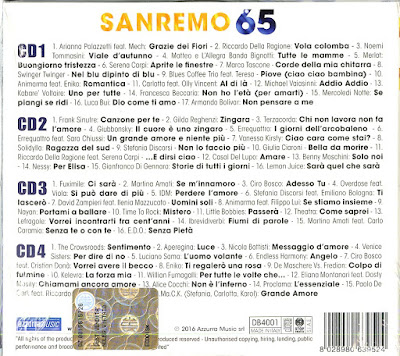 Here's a lovely new release from South Africa. For her new album Sonder Jou (Without you) Karin Bekker recorded six songs from the 2017 Eurovision Song Contest. Four songs are in Afrikaans, two in English.

Sonder Jou is available now through iTunes, Amazon, 7digital and Spotify to name a few digitessen.
A CD release is expected soon. (More details when I have them...)

Below is a list of the Eurocovers on Sonder Jou but the whole album is worth your while. The album also includes last summer's single Vriendskap (Friendship)

Links and sources:
Thanks to Roy
Karin Bekker Website, Fan-Facebook

Some more:
If you can't get enough, Frikkie Van Biljon recorded the 2017 Slovenian entry.
On My Way by Omar Naber becomes Elke Tree (Every step). Out on iTunes, Spotify and what have you. Frikkie's Facebook
And one more for the road: Hanco recorded the Australian 2017 song (Don't come easy by Isaiah Firebrace) in Afrikaans. His version Dis Nie Maklik Nie (It's not easy) is also out on all important digital sources. Hanco's Facebook

Posted by Eurocovers at 10:12 AM No comments: