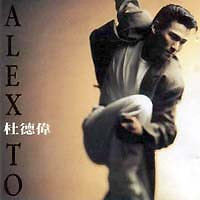 A blog I love to visit frequently is Favorites In Original.
Here you can find coverversions in Cantonese paired with their originals including picture sleeves.
It features originals from all over the world and if you browse around you'll find a few Eurocovers and some non-Eurovision songs by Eurovision stars like Patricia Kaas, Anna Oxa, Julio Iglesias, Celine Dion, Carola, Kirka, Nicole and Celine Dion.
One that I didn't know yet is by Alex To. 抱緊我 is a Cantonese (Chinese) coverversion of Johnny Logan's Hold Me Now, the 1987 Eurovision winner for Ireland.
Alex To already recorded it for his 1987 debut album Alex To (杜德偉). Great to find another Eurocovers treasure 22 years after its release. (the post is here) -- 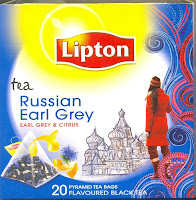 I'm currently working on an updated version of the South Africa coverversions list, as it has been a few years since I last published that (actually pre-Eurocovers blog). It'll take some time, but I hope it's here in a few weeks. (it's here now)
For now: you'll have to do with an update on the Eurocovers that have been released in South Africa fairly recently. 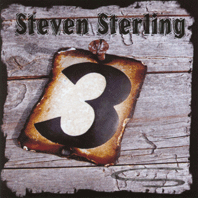 Steven Sterling III
Steven Sterling has released his 3rd album Steven Sterling 3. (Sterling Musiek STERCD002)
There's one new Eurocover of interest there and it's the opening track Mama Afrika. This is a great Afrikaans version of Mama Corsica, the French entry of 1993 by Patrick Fiori.
The album also includes a re-recording of Lief Vir Alles Hier (Für Alle, Germany 1985), which Sterling recorded for his Debut CD.
Third song of Eurocovers interest is Glimlag (Smile), a coverversion of Under Your Spell (Sweden 2006 pre-selection - Evan)
The album is for sale at Kalahari*.
Lief Vir Alles Hier (In love with everything here) is technically an André Schwartz ♫ cover, who was the one who made the song hugely popular in South Africa. 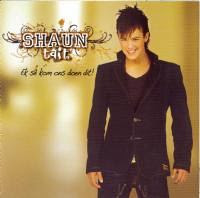 Casanova Shaun Tait
Shaun Tait's second album Ek Se Kom Ons Doen Dit (I say let's do this) is out now and features the first South African coverversion for Andorra. He recorded Casanova (2008 - Gisela). The album also features two popular pre-selection songs.
Gee Jou Hart Vir My (Give your heart to me) is Lay Your Love On Me (BWO, Melodifestivalen 2008) and Viva La Musica was Man Meadow's song for the Polish 2008 selection.
Title track Ek Se Kom Ons Doen Dit is a cover of Charlotte Perrelli's Bullet, her follow up single to Eurovision hit Hero (CD Out now on Sony SA) (Kalahari)
On his debut CD Shaun Tait recorded Sing 'n liedjie (Sing a song) as a duet with Patricia Lewis, Queen Of South African Eurovision Covers. It's Shame On You (Denmark 2004 - Thomas Thordarsson) 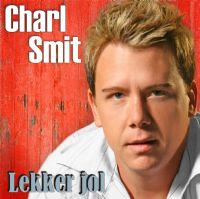 Let's Rage At The Club Kung FuCharl Smit's last CD Lekker Jol (Great party, Ramkat RAMCD001) features two tracks of Estonian origin.
Kom Ons Raas (Let's rage) is a coverversion of Estonian entry Let's Get Loud by Suntribe. Even better (imho) is the title track, Lekker Jol. It's Club Kung Fu, a pre-selection song from 2003 that was originally by Estonian superstars Vanilla Ninja. That song was the audience favorite, but their vote only counted for like 10% or so. The professional jury hated it, but Vanilla Ninja did quite well for themselves, especially in Germany. They were invited to represent Switserland in 2005 and with Cool Vibes they ended 9th.
Charl Smit's version of the song is about traffic. Smit is currently working on his new CD which will have some more Eurocovers surprises.
The album is available at Kalahari*. The track Lekker Jol was also released on the VA compilation Kuier In Afrikaans (Ramkat RAMCD004) 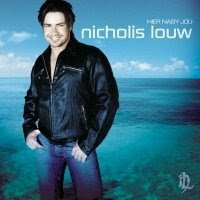 Another version of Club Kung Fu was recorded by Nicholis Louw: Welkom By My Party can be found on his CD Hier Naby Jou (Close to you).

I noticed a download site where you can preview the tracks (Rhythm Online)*. They sell legal mp3's internationally and are currently working on an easy payment system (it's too complicated now for my liking)
http://www.nicholislouw.co.za/ 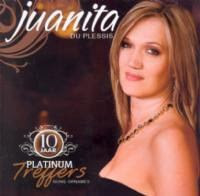 Juanita ForeverJuanita Du Plessis celebrates her career with a double CD of her best hits and new tracks. Opening track of CD1 is 'n Ewigheid, (An eternity) a new coverversion of Carola's 2006 entry Invincible (Sweden). It's already the 2nd Afrikaans version of this track, after the boys of Hi-5 recorded it on their CD Versoeking.
Juanita's 2cd 10 jaar Platinum Treffers is also available at Kalahari*. You can listen to all songs at her homepage (here) http://www.juanita.co.za/
Juanita's 1997 album Young Hearts included a coverversion of Gina G.'s Ooh Aah Just A Little Bit (U.K. 1996) in a hits medley 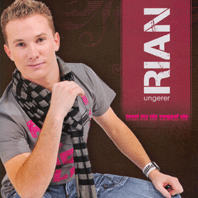 Moet My Nie Vergeet Nie
Rian Ungerer's CD Moet My Nie Vergeet Nie (Don't forget me) features the track Agter Moes Laat (Had to leave behind), which is a coverversion of Vukovi Umiru Sami (Croatia 2005 - Boris Novkovic)
Girl band Shine 4 have split up, but they have released a best CD with some new tracks. One of these is Je t'Adore (Belgium 2006, Kate Ryan) which is sung in Afrikaans.
Leandie Lombaard. I mentioned her CD here. Now she has her own website where you can listen to excerpts of the songs.
Some other recent releases are tenor Jannie Moolmans CD Ek Kom Huistoe (I'm coming home) which includes Vandag (Today) (Le Grand Soir, Belgium 2005), Jaycee Crauses CD Ek Weet with Steeds Verlief (Everything, Greece 2006) and Waar Is Jy (Tornero, Romania 2006) and the previously mentioned albums by Jennifer Zamudio and Patricia Lewis.

Special Thanks to Roy and to Juan.
*Please note: I haven't tried any of the shops mentioned recently and I advise you contact them first about postage, payment and delivery information if you're interested in buying any of the CDs.
If you want to hear Mama Corsica in Lithuanian check this Eurocovers post.
All South-Africa related posts at Eurocovers are here. The Document is here.

Eurovision 2009 - The Moscow Collection
The Amsterdam Eurovision 2009 Concert.
If Moscow is too far, the crisis hit your bank balance or you were planning a long overdue trip to Amsterdam anyway this is the 2009 event for you:
On April 18, Marcanti Amsterdam will host a concert with many Eurovision Stars of the 2009 contest. Already a very impressive list of artists have confirmed: The entrants of Denmark, Belgium, Spain, Iceland, Lithuania, Cyprus, Montenegro, Bulgaria, Albania, Bosnia-Hercegovina, Slovenia, Poland, Moldova and Armenia will attend, more artsist to be confirmed. The show is hosted by Marga Bult and Maggie MacNeal. TICKETS, Video promo. More Info
Posted by Eurocovers at 8:07 AM No comments: 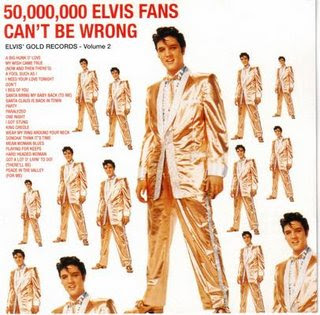 Probably it completely escaped you in your part of the world, but down in the lowlands the 2009 Belgian Eurovision entry, Copycat by Patrick Ouchène, is big news.

Now Georgia may think they're having problems with Putin on their case, Ouchène is really in trouble as he has offended Elvis and the wrath of the Elvis Army is a force to be reconed with.

Elvis fans have inundated all the Eurovision blogs and websites with their grief and the fanclub Elvis Matters has called upon the EBU (Big Giant Head of Eurovision) for the song to be banned because they are offended, hurt and deeply disturbed by the lyrics of the song. 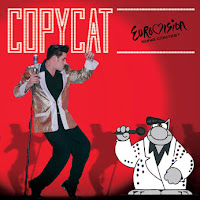 Ouchène sings about this guy who is copying him, wearing the same clothes, eating the same sandwich etcetera. In fact Copycat is a tale about a cat. The cat being an Elvi-fied version of Le Chat, a popular cartoon figure by Philippe Geluck.

I thought is was funny, and even sweet. It's probably the F-word* that causes the biggest problem

Elvis Presley himself had to cope with similar outraged masses and the long arm of the law in his time. The good law abiding Christian society was deeply offended by his hip gyrating Hound Dog humping performances. And now it's the Elvis fans' turn to have their crusade.
I think it's a good publicity stunt for Elvis and the fans should be pleased that the King is put in the spotlight by someone else than the recordcompanies who are only re-re-releasing the 17th limited edition picture disc of Are You Lonesome Tonight because the fans will buy it anyway. But that's just my opinion.

Copycat Le Blog has all info, lyrics and the video of this years Belgian entry.
Copycat at the Moscow Collection
* - Fat

Eurocovers
Elvis Presley never recorded a cover of a Eurovision song although he came close in 1965 when he recorded, Please Don't Stop Loving Me (YouTube) which plagiarised the Italian 1964 winner Non Ho L'eta (by Gigliola Cinquetti). 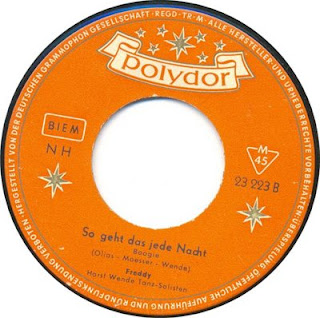 Rock 'n' Roll Kids
Copycat is a Rock'n' Roll song, a rarity in Eurovision world. Except for some very light twisty jive variations in the 80's (Yugoslavia's 83 and 87 songs for example) the only real Rock 'n' Roll song was one of the German entries of 1956: So Geht Das Jede Nacht by Freddy (Quinn).
A two minute hip shaker about a girl who dates a different guy every night (for dancing only of course, it's 1956).
Freddy didn't win, and the choice for the syrupy Refrain by Lys Assia shaped Eurovision for many years to come.
How the world would have been different if Freddy would have set the Eurovision standard back then.
Freddy recorded So Geht Das Jede Nacht in German (Youtube) and in Japanese (!).

I know of 10 coverversions of Eurovisions first Rock 'n'Roll song but none of them really catches the spirit of the Freddy original. Ralf Bendix gives the song a jazzy swing mood and is probably the best effort. (although I haven't heard them all).

Freddy himself also steered away from Rock'n' Roll, becoming one of the greatest melancholy German Schlager singers of all time, with romantic songs about sailors and heartbreak.
I don't know of any coverversions other than German or Instrumental. 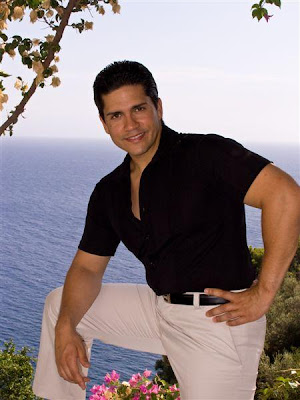 MySpace YourSpace OuttaSpace
MySpace is brilliant. Sometimes a bit slow maybe, but brilliant.
I already mentioned a load of Volare covers featured on MySpace. But there's more, so I'll check out the ones I find of interest by the great known and even greater unknown on a probably not so regular basis and share some of my my findings here at Eurocovers.

The handsome fellow on the right is Aaron Caruso.
On his MySpace he sings some Italian classics in various styles, but the relaxed laid back style on Dio Come Ti Amo (Italy 1966 Domenico Modugno) fits him like his pants do.
The song can also be found on his 2003 debut CD Passione. I really love the flugelhorn in the intro too.

Another sweet one that caught my ear is by Trio Los Hispanicos. (link restored 2011) Their MySpace features a coverversion of the Italian 1971 entry l'Amore È Un Attimo by Massimo Ranieri. It's in Spanish, titled Perdon Cariño Mio (track 4) and it only had 12 plays (most by me)!, can you believe that?
Trio Hispanicos are from Alamo, Texas and their Eurocover is a perfect melancholic Tex Mex ballad. Go check 'em out. 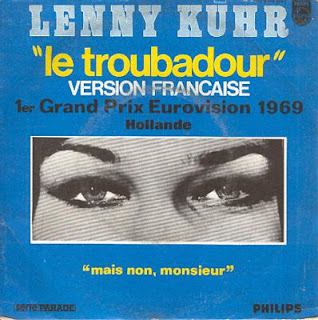 40 years De Troubadour tribute site.
Your Eurocovers celebrated the four 1969 winners in the 4 x 40 - Madrid 1969 series but now a new website has been launched with all you need to know (and more) about the Dutch co-winner De Troubadour.

It's created by the Official Lenny Kuhr fansite and they have done a marvellous job.
The work of love features many insights on Lenny Kuhr's adventures, the history of the song, discography, coverversions (yep) and many great pictures.

I love the Curiosa / Curiosities page with pictures from ads, postcards and even Lenny Kuhr cigar bands. And also the page about De Generaal / The General, the Lenny Kuhr tribute to Legendary Football Coach Rinus Michels is great.
And there's more, but you better check it out for yourselves.

The site is in Dutch, but with the Google Translator it works reasonably well in English and other languages.
Lenny Kuhr - De Troubadour tribute site (new link) and on this YouTube channel there are many Lenny Kuhr clips and performances.