Disco tune Libera was the 1977 Eurovision entry for Italy by Mia Martini. (13th place)
Here's a new version by Cheryl Porter from her 2016 album La Mia Mina, a tribute to Mia Martini and Mina. Love it! And anyone who tributes the two greatest Italian singers ever is ace by me.

All (except Italian) can be found on the Mia Martini compilation Stranieri (2014), two CDs highlighting her international recordings.
She entered Eurovision again in 1992 with the majestic Rapsodia (ending 4th).

Libera hasn't been covered much, I only know about a few versions from 1977 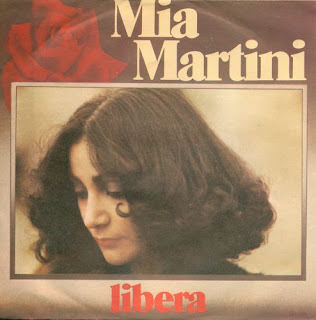 * A question: Has anyone ever located a 1977 (single) release of the French version. I know it was released on the 2003 compilation Canzoni Segreti, but was it known before that?
Posted by Eurocovers at 12:15 PM No comments:

100! Forces' Sweetheart Vera Lynn - This Is My Prayer 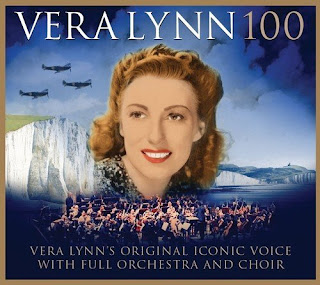 Below is a Eurocovers post from 2009 about Vera Lynn who turned 100 on March 20..
A remarkable anniversary for a remarkable singer who means more to many people than I can ever imagine.

Vera Lynn, Dame Vera Lynn to the Brits, is internationally the best known Sweetheart Of The Forces.
As promised in the Eurocovers post about another Forces' Sweetheart, Anne Shelton, here's a Eurovision coverversion by the singer most identified with the Second World War and
all commemorative ceremonies ever since.

Vera Lynn was born in the First World War and started to record in 1935. Signature song We'll Meet Again was first recorded in 1939. It became a song of hope in the dark days of the war and later a song of remembrance. The song gave its title to the popular 1942 film starring Vera Lynn herself.

Vera Lynn sang for the British and Allied forces all over the world on many occasions during the Second World War and she had her own radio show in which she sang songs requested by British soldiers serving abroad and messages from their families were broadcasted.
Other popular Vera Lynn hits of the (pre charts) war years were The White Cliffs Of Dover, Yours and You're In My Arms. In the 50's she scored hits with Forget Me Not (a U.K. #1), Auf Wiedersehn, Homing Waltz and My Son My Son. Her last U.K. hit was Travelling Home in 1957.

Vera Lynns career started way before Eurovision and unlike Anne Shelton she didn't participate in any of the early British preselections for Eurovision. But she was on the selection committee of the 1959 U.K. selection.

Eurovision 2020: The Rotterdam Collection is (still) on!

This Is My Prayer
As far as I know Vera Lynn recorded one Eurocover and it's the 1964 winner Non Ho L'eta (Italy, Gigliola Cinquetti). Vera Lynns English version, This Is My Prayer was released on a single in 1964 (HMV POP 1287). It didn't reach the charts and now is a hard to find collectors item. It was re-released in 2007 on the 2CD The Singles Collection (EMI Gold)
Here's an audio tube

This Is My Prayer was recorded by several artists in the 60's, but original singer Gigliola Cinquetti didn't release an English version until 1974, when she included a new recording on her album Si, coinciding with her second Eurovision appearrance. Cinquetti released Non Ho L'eta in Italian, French, German, Spanish and Japanese in 1964. Contrary to popular rumours, Cinquetti never recorded an English version in 1964, so her 1974 version is actually a coverversion of a coverversion of her own song. (...) 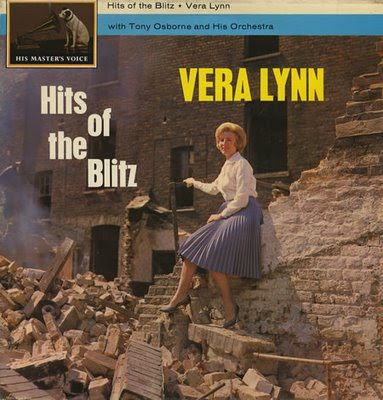 The Veterans Sweetheart
Vera Lynn never repeated her 40's and 50's hit successes but always remained a high profile guest on war remembrance ceremonies and TV shows. Her most successful albums later have always been reworkings of 40's songs like the 1962 LP Hits Of The Blitz.

For the largest part of her 70 year career, Vera Lynn has been a remembrance singer, always representing the good old days and the bad old days.
No disrespect intended, but it seems a bit sad that her career has always been stuck in the war. Record buying audiences just couldn't accept her work as that of a contemporary artist having a recording career with new songs.
In 1979 she has a go at ABBA's Thank You For The Music (released on single PYE N 108), which perfectly illustrates the mood of always looking back. 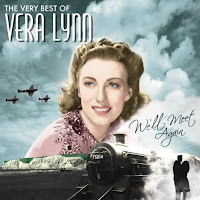 Update 14-09-09: Congratulations are in order. In the week that 11 Beatles albums enter the top 40, Dame Vera Lynn scores this weeks #1 in the U.K. Album Charts with the compilation We'll Meet Again - The Very Best Of Vera Lynn.
The new compilation (on Decca) has 20 tracks including all the evergreens. (but not This Is My Prayer)

The album is available in the U.K. shops and at all major internet outlets, including digital.

links and sources:
We'll Meet Again RAF performance (YouTube)
Vera Lynn at 92 article in The Guardian
This is my prayer at Discogs
Vera Lynn Wiki
Anne Shelton at Eurocovers.

Check this Eurocovers post for This Is My Prayer by Dana Valery and this post for more versions of Non Ho L'Eta, # 7 in the top 10 most covered Eurovision songs. 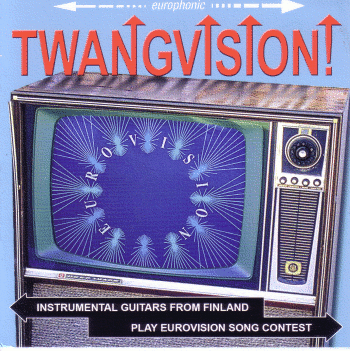 CD Tip: Twangvision
Here's one I missed back in the days.
After (or rather before) Caramba Samba from Norway and Greek Bossavision from Brasil here's Twangvision. Twangy guitars, think Surfari's, Telstar, Apache.

Twangvision is a CD released in 2007, coinciding with the Helsinki contest.
It features instrumental guitar versions in Twang style of some popular Eurovision hits and a host of classic Finnish entries. All newly recorded by Finnish guitar bands.

I've been trying to find some audio clips on the net, but I haven't found any yet, so you'll have to make do with the tracklist.
The CD is available through many Finnish webshops including the recordcompanies own site Twangsville.