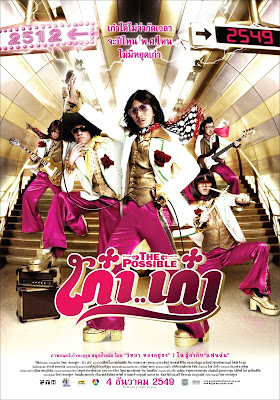 OST - The Possible
If you happen to be in Thailand for Christmas, just be sure to check out the hit movie 'Gao Gao - The Possible'.

It's a comedy adventure movie about a band (The Possible) from 2512* accidentally being zipped to 2549, but there's one main reason why it's possibly the Coolest Movie Ever Made: It has a cover version of A ba ni bi! - In Thai !!

The song, now 'Ai bah Ai bee Ai bo Ai be' is performed by the band (a spoof version of popular 60s Thai band The Impossible) with main actor Joey Boy as the lead singer.
The soundtrack is released on a CD and also on a karaoke DVD.
Also includes Thai cover versions of Ring My Bell (Anita Ward) and You're my world (Cilla Black), Linda Linda (Tee Set) and a track called Wan-kerd (Del Shannons Runaway)

The CD and karaoke DVD are available from http://www.ethaicd.com/ . I bought a CD from them once which arrived in 10 days and was shockingly cheap. 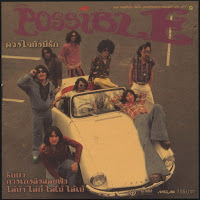 The movie has it's own website http://www.possiblethemovie.com/. It's in Thai, but you can look at the pictures.

The offspring of Dschinghis Khan

Here's some lovely annoying versions of Dschinghis Khan.
It seems the Ralph Siegel classic about the man who gave his genes to 1 in every 200 men living today is still going strong and spreading now beyond the world gene pool into animation and to your cellphones.

We already had the annoying finnish cellphone chipmunk Pikku Orava and now I found two Baby versions from Korea which are equally irritating.

One has the innocent name Bebe Queen and the other is published by Dreamwiz or something (I really haven't got a clue, maybe you do???).
Both versions are just a minute long and made in 2006.
There will be more Dschinghis Khan features in the future with versions from all over the world. 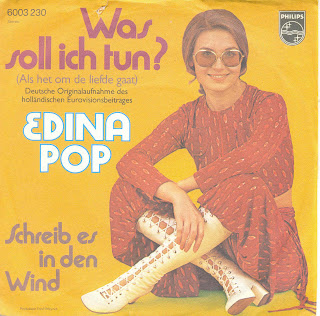 Here are some Eurovision coverversions by Dschinghis Khan member Edina Pop.
Way before the success with Dschinghis khan recorded some popular ESC tunes.

Edina Pop was born in Hungary and she made a (now collectable) LP under her own name Marika Késmárky (or Késmárky Marika as the Hungarians like to say).
The 1970 LP includes Kopp, Kopp…, a hungarian version of Knock Knock, who's there, the song made famous by Mary Hopkin.
She also recorded the same song in German as Komm, komm zu mir.

Another song she tackled is the Spanish co-winner Vivo Cantando. Her version, Zwischen Wolga und Don is an odd cover which includes a part that wasnt in the original, but that can be heard in several other covers like the one by Birthe Kjaer (Denmark) or Arie Ribbens (Netherlands).

Was soll ich tun is a coverversion of the number 4 from 1972: Als het om de liefde gaat by Sandra and Andres (Netherlands).

Edina Pop is still going strong and you can find her website here. http://www.edinapop.de/

To get into the December spirit here's two Eurovision songs reworked with Christmas lyrics.

A Snowy Jingly bellsy Christmas version of 'Gente di mare' by Tozzi and Raf is as unlikely as Ms. Claus serving Reindeercarpaccio. 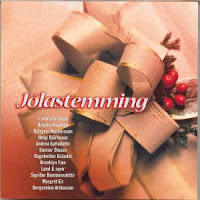 So a Christmas interpretation of the Italian song can only come from Iceland, where the sun won't be seen until late in the next Eurovision season, but the people are real 'Gente di mare'.
'Komdu um Jólin' by Gunnar Olason (Olafsson) is on VA Christmas CD Jólastemming and other compilations.


'Stad I Ljus', by Chess player Tommy Körberg is a different case. The monumental hymn lends itself perfectly for the Season to be jolly and depressed at the same time.
Sofia Källgren, MF star, turns the song into 'Spread your light' which has appeared on several Christmas compilations in Sweden (100% Jul 2 (1996)and Svenska Julklassiker (2002)).
More about Sofia at http://www.sofiakallgren.com/

'Stad I Ljus' has been recorded by several gospel and religious singers over the years, most notably Christian Rivel and Michael Järlestrand, who recorded both Swedish and English versions. (files wanted) 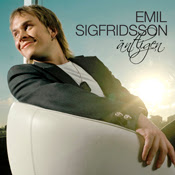 P.S. Another Icelandic Christmas reworking is 'Stjarnar mín' by 'Íslensku Divurnar'. Thanks for the tip Stelios.
This version of Swedens Se på mig (Jan Johansen, 1995) was released on 2002 Christmas album 'Fróstrosir'(2002) and is now re-issued on a compilation 'Fróstrosir - Bestu lögin'. (sorry, don't have the song).
Posted by Eurocovers at 9:23 AM No comments: