The Road To Baku - Lys Assia 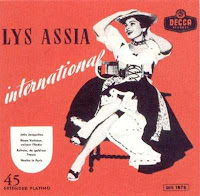 I know, christmas is up first, but it’s already so busy on the Eurovision 2012 that Eurocovers will take an early peak on artists who are trying to get to Baku by means of their national finals.
Switzerland has a very extensive preselection (more info here) with well over 200 songs participating in various broadcasters pre-pre-pre voting extravaganzi.

One artist that of course caught everybody’s attention is Lys Assia, who enters the selection with C’était Ma Vie penned by 'Mister Eurovision' Ralph Siegel with lyrics by 'Mister L’Oiseau Et L’Enfant' Jean Paul Cara.
The song is a big orchestra driven ballad reminiscing of the olden days. It's Lys Assia's My Way or This Is My Life (The Shirley Bassey one). I don't know if there's a place for the rather old fashioned entry in todays Eurovision field, but it's great to see the old gal is still at it.

Update: Broadcaster SF has announced that Lys Assia will proceed to the Swiss National Final on December 10. Congratulations!
Another Update: Lys Assia ended 4th in the Swiss national final. Read all about the winner here at the Baku Collection.

Eurovision fans will of course know (and some even remember) the Grand Dame / Grand Ma of Eurovision as the first ever winner of our annual music fest. With the song Refrain, written by Geo Voumard and Émile Gardaz, Lys Assia won the initial edition of the Eurovision Song Contest back in 1956.

In 1956 each of the seven participating countries had two songs in the (radio only) competition. Switzerland selected  Lys Assia with Das Alte Karussell (The old Carousel) and the eventual winner Refrain. 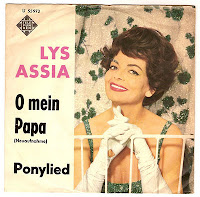 The Swiss must have loved Lys a lot as she went on representing the country in 1957 with L'enfant Que j'Étais (The child that I was, 8th place) and in 1958 with her best effort Giorgio (2nd place, brilliant song).

Lys Assia’s biggest hit was not any of her Eurovision songs (although Giorgio did quite well in several pre historic charts) but her version the evergreen Oh Mein Papa (1950). Other hits include Arrivederci Roma (1956) Deine Liebe (1957), Ein Kleiner Gold'ner Ring (1961) and Die Sterne Von Syrakus (1962).


Eurocovers
In my book there are three Eurovision songs Lys Assia covered. There may be more, as Lys Assia must have recorded about a million songs in the 50’s and sixties.

Bonus Adorable Lys - A medley recorded in 1964 with the Addy Flor orchestra sung in English, German, French and Spanish including a bit of Refrain. 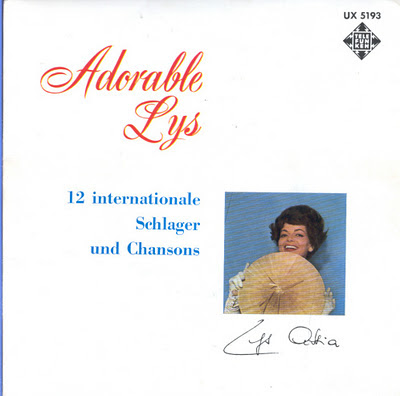 Eurovision 2012 - The Baku Collection
Shopping: Lys Assia at BeaRecords
Posted by Eurocovers at 2:52 PM No comments: 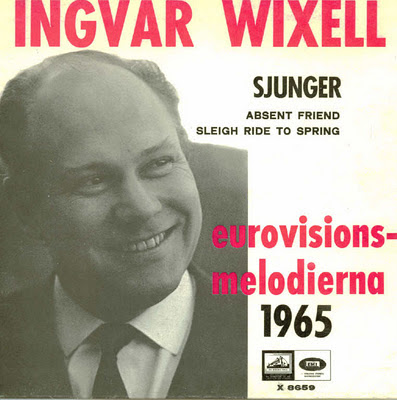 Swedish Opera singer and Eurovision star Ingvar Wixell died.
Wixell's place in Eurovision history is highlighted by the fact that he sung his entry (for Sweden) Absent Friend in English. No one* had done that before and it also caused the much debated language rule to be introduced where every artist must sing in his own countries' language.
* of course except U.K. entries and the first Irish one, on stage 7 songs before Wixell. 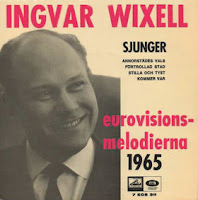 Absent Friend was originally Annorstädes Vals in Swedish. Ingvar Wixell sang six songs in the Swedish national final of 1965 (Svensk sångfinal). He never recorded any other Eurovision song.
Ingvar Wixell was a celebrated baritone who performed for many years with the Stockholm Opera and the German Opera of Berlin. Many of his classical performances were released on LP/CD.
He also recorded a popular christmas album Christmas Music In Sweden (1964).
Posted by Eurocovers at 6:49 AM No comments: 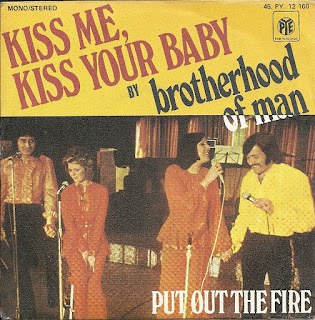 Brotherhood Of Man, you either love'em or adore'em.
The 1976 Eurovision winners (Save Your Kisses For Me) were quite succesful in the 70's.

The Eurovision line-up we all know and love had some international hits before the contest (1975 hit Kiss Me, Kiss Your Baby was the first B.O.M. single I bought).
They also managed to hold on to their success after Eurovision (Angelo, even though a blatant ABBA - Fernando rip-off, is totally brilliant).
An early incarnation of the band had also scored some hits in the U.S. in the early seventies, most notably United We Stand.
By the time the eighties came around, the stream of hits dried up and some clever people at B.O.M.s headquarters thought a greatest-hits-of-other-people LP would be a good idea.
And they were not wrong. The LP stayed on the U.K. charts for two months and achieved gold record status.

Brotherhood Of Man Sing Twenty Number One Hits features, well, 20 #1 hits. Most songs were hits in the 70's. The album includes one Eurocover: What's Another Year by Johnny Logan, the Irish winner of 1980.
Other tracks are ABBA's Dancing Queen, Boney M's Rivers Of Babylon and the Commodores' Three Times A Lady.
See tracklist below for all 20 #1 hits.

Da' Brotherhood tried to repeat the success with a similar double album with 20 disco hits and 20 love songs titled 20 Disco Greats / 20 Love Songs. but that failed to repeat the popularity of 20 #1 hits .
The Eurovision line-up of Brotherhood Of Man are still going strong and perform often on the Eurovision / nostalgia circuit, both with 70's tribute shows and their own material. A good time guaranteed for all. Respect!
The original Twenty Number One Hits LP was released in 1980 on the Warwick label, the CD re-issue is released on Northwold records. It's out 10-10-11.
Brotherhood Of Man Sing Twenty Number One Hits 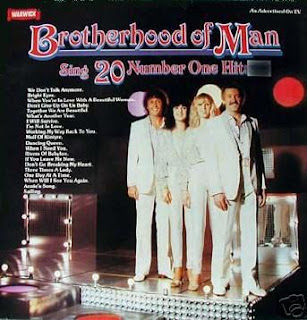 Dancing Queen
When I Need You
Rivers of Babylon
If You Leave Me Now
Don't Go Breaking My Heart
Three Times a Lady
One Day at a Time
When Will I See You Again
Annie's Song
Sailing
A Norwegian version of Save Your Kisses For Me by the Bendik Singers can be found in this Eurocovers post. A Czech version by Helena Vondrackova and Jiri Korn is here.
Brotherhood Of man website
Posted by Eurocovers at 9:35 AM No comments: