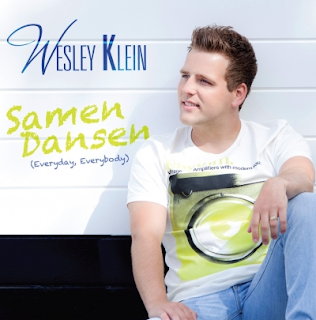 Dutch singer Wesley Klein has released a Dutch version of Zaleilah titled Samen Dansen (Everyday Everybody) (translates as Dancing Together) Released on June 28.
It's the first track on a 3-track cdsingle (Berk music 6017541)

Zaleilah is the Romanian entry from 2012 by Mandinga. Find out about all their versions and releases here at the Baku Collection.

Zaleilah is not the first Eurovision song covered by Wesley Klein. The Danish 2010 entry In A Moment Like This became Geen Dag Zonder Jou (Not a day without you) and was released on his CD Vandaag En Morgen (Today and tomorrow) and cdsingle. It scored a # 42 hit in the Dutch top 100.

Former construction worker Klein shot to fame in the Netherlands in 2010 when he won the 2nd edition of Popstars (Talent show on SBS channel). He followed up his victory with a #1 hit: a cover version of You Raise Me Up. He scored 10 top 100 hits in total.

Wesley Klein website
The cdsingle is available at SingleCDNL
Posted by Eurocovers at 9:42 AM No comments:

CD Releases: Volare in the 10's 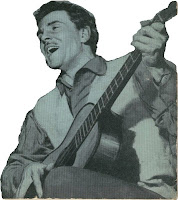 It's 55 years ago since Domenico Modugno's Volare (Nel Blu Dipinto Di Blu) conquered the world. You probably all know that Eurocovers loves a bit of history, so the Eurovision classic features in many posts, including the 2008 series Anno Domenico.

I hadn't looked into it much recently, but after a rainy morning browsing the net I noticed that the everblue evergreen is still being recorded in it's 7th decade. 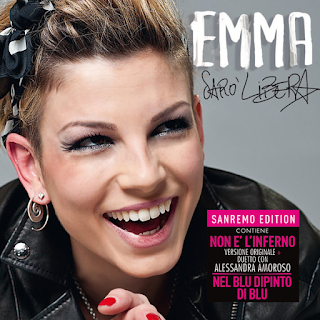 Emma
Followers of the Italian Festival di Sanremo, the mother of all songcontests, know Emma.
Emma Marrone entered the 2011 Sanremo together with Modà and the song Arriverà.
In 2012 she went it alone and won Sanremo with Non è L’Inferno.
As a true Sanremo star, Emma knows her classics and she recorded Volare for the film Benvenuti Al Nord. It’s a comedy about the rivalry between the Italian North and the Italian South. Emma’s Volare accompanies the end credits. (video)
The track was released on the re-issue of her 2011 album Sarò Libera (2012) which also added the Sanremo winner in two versions. (Universal music Italy).

Emma cites Gianna Nannini as one of her main inflences. She accompanied Gianna on her 2011 Io E Te tour (see below)
Emma's latest album is Schiena, released in April 2013.

2014: Emma Marone is selected to represent Italy in the 2014 Eurovision Song Contest in Copenhagen, Denmark. Read all about that here at the Copenhagen Collection.

Chico and the Gypsies with Nana Mouskouri 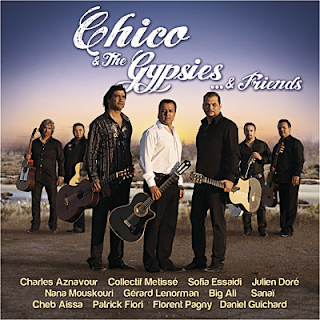 Chico is Chico Bouchikhi, one of the founding members of the Gypsy Kings. in 2012 Chico and the Gypsies released an album with duets titled Chico and the Gypsies....and Friends.
Since the Gypsy Kings 1989 hit, Volare became a staple song for any self respecting Gypsy / Rumba outfit. So it's not unexpected the song found its way to this album. But the guest star on the song is a surprise: our Nana Mouskouri.

In Eurovision titles Nana Mouskouri would probably be the Grand Duchess of Eurovision or something.
In 1963 the Greek singer entered the Eurovision songcontest for Luxembourg with A Force De Prier (By the power of praying) and ended 8th.
No further explanation is needed, Nana Mouskouri continued to superstardom ever since and she is still touring the world with her emotional and uplifting encyclopedia of songs.

Other guests on the Chico CD include Charles Aznavour and Eurovision stars Gerard Lenorman and Patrick Fiori.
Here's a live video of Chico and Nana doing Volare 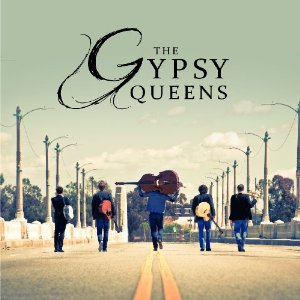 Gypsy Queens
U.K. based Gyspy Queens recorded Volare for their eponymous 2012 album. The band, led by Didier Casnati, presents a more jazzy style of gypsy music. Check out a BBC breakfast performance of the Queens' Volare here at their Youtube.

Gypsy Queens just played the Isle Of Wight festival and you can also catch them at this years Glastonbury.
Their new single, also on the album, is a cover of L'Italiano, the Toto Cutugno classic. (video) 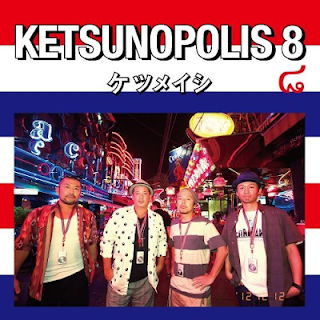 ケツメイシ
In Eurocovers Galaxy it's a small step from Gypsy music to Japan. Ketsumeishi is a Japanese hip-hop-pop boy/man band going since 2000. Their albums are simply titled Ketsunopolis (ケツノポリス) 1to 8.
1 was released in 2000 and 8 saw the light in 2012. Ketsunopolis 8 includes their coverversion of Volare in Japanese (ボラーレ).

Their 2012 hitsingle Love Love Summer includes two versions of Volare: The original album version and the FPM Everlust remix.
Volare is mostly a Gypsy Kings cover with some rappy bits thrown in, but still a great tune, especially the remix. 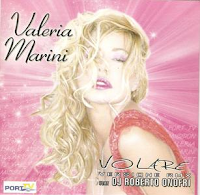 In 2010 actress / model / stylist / sex symbol Valeria Marini released Volare on a cdsingle with DJ Roberto Onofri. The cdsingle was only avalable with a magazine (Di Più) and allegedly sold 300.000 copies (of 500.000 pressed).
All proceeds were for the victims of the Abruzzo earthquake.
Source: ADNkronos 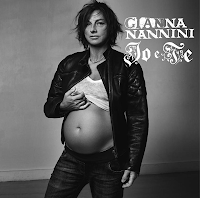 Gianna Nannini is a famous singer in Italy, but attempts to make her success global have not resulted in world domination. Pity, really as she made some incredible albums. Her biggest claim to international fame is probably Un Estate Italiana (with Edoardo Bennato), a theme tune to the 1990 football world cup. In the 80's she scored a few European hits with I Maschi and Bello E Impossibile.
She released Volare on her 2011 album Io E Te. (Sony Music Italy) The song was also included on the live edition of the same album. Nannini probably had no trouble remembering the lyrics as she was one of the singers who recorded Volare For Ethiopia back in 1985 (see this Eurocovers post)

Andrea Bocelli never recorded a real studio version of Volare except for a Barilla pasta commercial. But he has been performing the song live on many occasions. Live album One Night In Central Park, recorded in (you guessed it) Central park, New York features a live version with David Foster at the piano. (Sugar Music, 2011)


Francisco recorded a Spanish live version of Volare with Santiago Segura for his album La Voz.
Now, many singers are named Francisco, so I don’t really know who this is. He must be someone, as the album has some impirtant guests.
Update: Francisco won the OTI contest (Spanish language Song contest) twice. (1981 and 1992) and is a well known singer in Spain. (Thanks José Antonio!)
Well worth mentioning is that La Voz also includes a version of Al Di Là  (Más alla in Spanish) the Italian 1961 Eurovision entry, as it's a duet with no one less than Pastora Soler of Baku Eurovision fame.
And there's Dio Come Ti Amo (Dios como te amo in Spanish) performed with Paca Ribes. This is Domenico Modugno's 1966 Eurovision song.
Other people guesting are Julio Iglesias Jr. and Daniel Diges (Oslo 2010) (Warner music Spain).
Posted by Eurocovers at 11:48 AM No comments:

Gourmet film have released this lovely tribute to the Olsen Brothers (Jørgen and Niels Olsen). It's a funny movie revealing the secret of how the brothers got the inspiration for their 2000 Eurovision song Fly On The Wings Of Love.
The short film, carrying the title of the Eurovision winner, is set in the early 70's. The Brødrene are hitch hiking through the U.S. on their way to San Francisco to make it in America.
The road trip stars Allan Hyde, Aske Bang, Emma Bell and Hailey Boyle. Hyde and Bang directed and Nina Helveg produced. It features several Olsen Brothers songs including their 1978 Danish Melodi Grand Prix hit San Francisco. (see below)
The full 16 minute movie is in above youtube, the bits in danish are subtitled.

Fly On The Wings Of Love won the Stockholm Eurovision Song Contest for Denmark in 2000. Originally the song was performed in Danish as Smuk Som Et Stjerneskud (Beautiful as a shooting star) in the Danish national final.
Sweden has become lucky ground for the Danes, as this year Denmark won the contest in Malmö with Emmelie De Forest and her Only Teardrops.

The actors:
Allan Hyde is a familiar face (although well disguised), he's known as vampire Godric on HBO's series True Blood.
Emma Bell also has a horror past, she was Amy in the first season of The Living Dead (AMC). She's also cast in the Dallas revival as Emma Brown (TNT), daughter of an ex-wife of Bobby Ewing (or something like that)
Aske Bang has been in a several Danish movies and TV series including an episode of Borgen.
Hailey Boyle is a stand up comedian.

Warning: Probably a bit NSFW: it has some unidentified cigarettes and hippy sex on LSD.

Gourmet Film is Allan Hyde's and Aske Bangs film project/company.
The film is co-funded by gifts from the public through Kickstarter.com and other sources.
They love Eurovision, check out their new years video Save Your Kisses For Me (upd. heavily geoblocked now) starring Aske Bang, Nina Helveg, Allan Hyde and Julie Grundtvig Wester as the Mighty Brotherhood Of Man.

Songs featured in the film:

San Francisco
- 2nd place in the 1978 Danish national final
Marie Marie
- single from 1982
One Woman, Two Lovers
- from their 2000 CD Wings Of Love
I Have To Dance
- Single from 2000, follow up to the Eurovison winner
Angelina
- Single from 1972, the first hit for the Bro’s
Fly On The Wings Of Love
- The performance at the Stockholm contest is featured, Terry Wogan famously commenting "I have a sneaky suspicion about that one."
Additional score by Djarn Kargin and Daniel Vognstrup
Posted by Eurocovers at 10:07 AM No comments: