A surprise hit for a personal Eurovision favorite.
Every now and then the popular TV show Beste Zangers Van Nederland (Best singers of The Netherlands*) comes up with a song that somehow strikes a chord and becomes a hit.
Door De Wind (Through the wind), the Belgian entry originally performed at Eurovision by Ingeborg always was a beautiful song even though it only came 19th out of 22 entries in 1989.
Dutch singer Miss Montreal did her heartfelt version in the show dedicated to the original composer (and backing singer) of Door De Wind Stef Bos and people ate it up and bought it into the charts. Finally some justice for a classic.
* The format is known in many other countries. It’s a show where singers sing each others songs and everyone goes all tearful and gooey over it (which makes it pretty much unwatchable for me).
Ingeborg (Sergeant) recorded three versions of the song, the original, an acoustic version and an English version (Breakaway). Plus there's an instrumental you can sing along to. They were released over two single releases (7" inch vinyls).
Ingeborg's singles were released in the Netherlands but obviously also available in Belgium.
- Door De Wind / Door De Wind (Acoustic)  (HKM 145 491-7)
- Breakaway / Door De Wind (Instrumental)  (HKM 145 509-7)
The English version single comes in two different sleeves.
The English lyrics were written by Simon Shrimpton-Smith who in the 70’s recorded under the name Simon Le Bon. (not him of Duran Duran)
The original version was also released on Ingeborg's 1990 album Voor Eén Seconde (HKM LP & CD) and her 2004 compilation CD Diamond Collection (HKM).
Ingeborg's Eurovision performance Youtube & English version Youtube audio 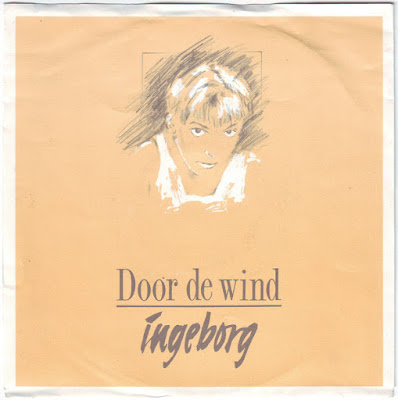 The hit version by Miss Montreal is released through your usual digital sources. You’ll be pleased to know that the single version does not have the emotional affectations the video has.

There have been a few coverversions of the song, some very recent. I quite like the country tinged version by Tamara and Tom.