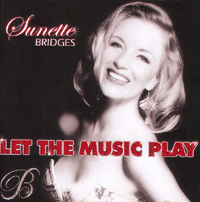 Being the offspring of a celebrated superstar must be a daunting job. On the one hand people are interested in you because of your famous parent, on the other hand the press will scrutinize every move you make and compare it to your mom or dad. (and hope you fail...)

Either if you want to go your own way, or follow in the footsteps of your ancestor, you can never really do it the right way (well, except Enrique maybe). There's always the accusations of capitalizing on the success of the ones that came before you.
Sunette Bridges is no exception. In the past she has been given a hard time in the South African tabloid press, who measured out every move she made, good or bad.
Sunette Bridges has to fill the shoes of her father Bles Bridges (1947-2000), who is one of the great legends in Afrikaans schlager / pop music history.

After an absence of almost six years Sunette is back with a vengeance.
She released her 6th album Let The Music Play and the album was well received by the critics of Afrikaans music.
It's a wonderful collection of songs; coverversions and a few self penned ones, that reflect a coming to terms, a coming of age even, for the South African singer.

Here are the tracks on Let The Music Play.
1. Girl Without Love
The album opens with a version of A Man Without Love. Not the U.K. 1966 Eurovision song, but a cover of the San Remo song Quando m'innamoro from 1968. But most people know it as the Engelbert Humperdinck's world hit.
2. I've Never Been To Me
Remember Charlene? Her original is one of the most unlikely Motown hits ever. It's raunchy and at the same time almost religious and one of the timeless pop classics. Sunette's version is an uptempo affair without losing the essence of the original song.
3. You Are
A duet with Xavier
4. Solitaire
5. Story Of A Life
6. Shallow
Shirley Clamp's Min Kärlek (from Melodifestivalen 2004) in an English version with lyrics written by Sunette herself.
7. Il Mondo
Another Italian classic, performed in Italain by Sunette
8. If I Give My Heart To You
A Petra Frey (Eurovision 1994) Song
You can watch this one at YouTube. With bits from her Let The Music Play Theatre tour.
9. Andante, Andante
Frida sang it on Abba's Super Trouper LP, a timeless song from Abba's 'lighter' collection.
10. Wanted
The Dooley's! remember them,? Wanted was a 1978 hit, #1 in Japan even. Sunette does a delightful pop version and for me one of the top tracks of the album.
11. L'amour Ca Fait Chanter La Vie
The only real Eurocover on this album is the #2 from 1978, Jean Vallée's song is the the typical 70's ballad only to be found at Eurovision. Sunette recorded it in French.
12. You Don't Bring Me Flowers
The Barbra Streisand & Neil Diamond classic in an uptempo version.
13. A Mi Manera
Sinatra's My Way in Spanish and English
14. Mano
One of the hits by Maywood, the Dutch duo who failed to re-ignite their career with a miscalculated Eurovision appearance 10 years after Mano was a hit. Outside the Netherlands Maywood enjoyed some success in Spain, Germany and South Africa and just about every non-anglo country in the music world..
15. Broken Heart
Thomas G:Son written preselection song from Finland song Who Cares About A Broken Heart originally by Johanna.
16. Get The Party Started
At first I though it silly to end an album with a track about getting started, (The 1 Non Blonde Linda Perry penned Pink hit) but I was wrong. After getting all this out in the world, it's the dawning of a new era for Sunette. 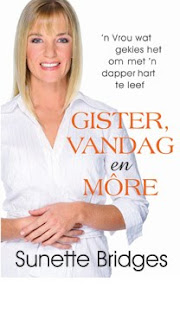 Sunette Bridges has also been working on Afrikaans versions of the Maltese and Albanian 2005 Eurovision entries, but they remain unreleased.

In 2007 Sunette issued the book Gister, Vandag en Môre (Yesterday, Today and Tomorrow) in which she recounts her life story .
How is it to be raised in the a family with a famous father, how she made her choices in life, both bad and good, and how she dealt with the media attention, wanted and unwanted.
The book is in Afrikaans and is still available at graffitibooks.co.za.

Let The Music Play is available at Kalahari who sell internationally.
Posted by Eurocovers at 1:21 PM No comments: