Here's Anggun performing Puppet On A String in the 2011 Eurovision presentation show where the 2011 French entry Sognu by Amaury Vassili was introduced.
It was just announced that the same Anggun will represent France in the 2012 contest in Baku. Find out more about next years French bid here at the Baku Collection.

Some Indonesian Eurocovers at the following pages: Lilis Suryani, Hamidah Ahmad, Sandra Reemer
Posted by Eurocovers at 2:43 PM No comments: 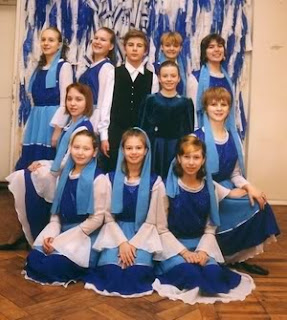 To celebrate, here's some kids covering some of your favorite Israeli Eurocovers.
The kids on the right are Ensemble Theila, a group of kids doing song and dance through their school (St. Petersburg School № 274 Yerushalayim, Russia).
The happy bunch made an album My Little Land (private issue) covering the classics from Israel, including some Eurovision songs. Some surprising choices and some obvious ones.

The Eurovision songs are:
A Ba Ni Bi, Israels first winner from 1978 (Izhar Cohen and the Alpha Beta).
Hallelujah, the follow up and a home win for Milk and Honey in 1979.
Kan, Duo Datzes #3 from the 1991 contest and still the best example of a classic Israel entry, choreography and all. Love. 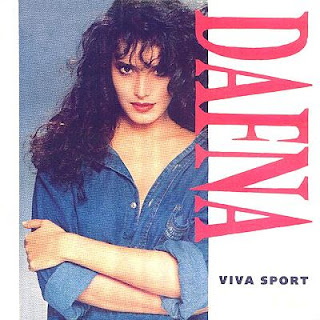 Ze Rak Sport (The Theila's call it Rak Sport). This is a bit of a surprise, as I have never before come accross a coverversion of this 1992 entry. Ze Rak Sport was a sunny and poppy ode to the Olympics to be held in Barcelona, Spain that year. Dafna Dekel and her handsome conga boys reached 6th place at the Stockholm contest. The English version of the song was titled Viva Sport.
Amen, Liora's 1995 effort to make a new Hallelujah didn't quite achieve that, but still ended 8th.


Special thanks to StPeters78

The 2011 Junior Eurovision CD (2CD with original an karaoke versions) will be available through BeaRecords. They also stock a host of other Junior ESC CDs and cdsingles of past contests.
Posted by Eurocovers at 8:27 AM No comments: 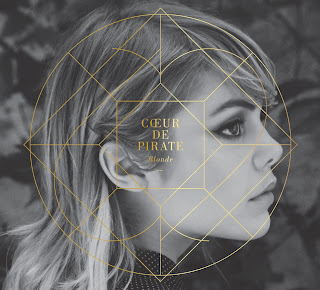 Off Topic Topic alert! But here's a shopping tip for everyone who likes a bit of French Pop.
I just ordered the CD Blonde by Cœur De Pirate, because it's wonderful, lovely, gorgeous and all that.
I stumbled accross the Cœur De Pirate website landing on the Boutique page. Scroll down a bit you can listen to all tracks of the album. If you do just that I won't have to blab on about how lovely this album is.
I hadn't heard of Cœur De Pirate before (nobody told me) but it turns out it's a nom de plume for Béatrice Martin from Quebec.
She already has one hitalbum behind her with Cœur De Pirate, which spent over two years in the French charts (and still I missed it).
She had a #1 in France in 2009 too, a Duet with Julien Doré: Pour Un Infidèle, which also scored a top 10 hit in both Belgiums.

Blonde is CDP's second album and it just entered the Canadian album charts at #5.
It's poppy, romantic, sometimes emotional (Cap Diamant is goosebumps material) a bit retro and definitely sexy.
Of course there are some comparisons that pop up right away and it would be very easy to say Vanessa Paradis. Actually, if you like VP, you'll love CDP. There's also a hint of Lykke Li or Alizée or even Françoise Hardy from the olden days.

A la Boutique you can buy the digital download, CD or LP of the album. But if you buy any of the physical formats you get the digital version as well (and straight away, listening to it now). Very easy payments and worldwide distribution are available.

Now if only Switzerland would go back to scouting in Canada for their Eurovision entries....

Cœur De Pirate website
The clip below is the first hitsingle from the album titled Adieu.

Posted by Eurocovers at 6:16 PM No comments: 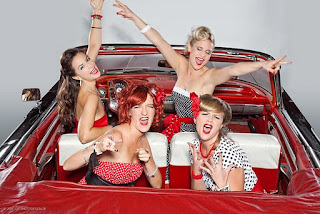 Sha La Lie, Sha La La, that song just keeps on giving.
11 - 11 - 11 sees another cover version of  Sieneke’s Dutch schlager entry to the Oslo Eurovision Song Contest of 2010.
The song didn't reach the final but it's probably the most covered entry of 2010. (in fierce competition with the Danish entry In A Moment Like This)

The new release is from Germany. Cölln Girls have recorded Sha-La-Lie in Kölsh (the language / dialect spoken in Cologne) in time for the launch of Karneval season 2011/2012.
After Sebastian Charelle and Jäger DJ Alex / Matti Valentino this is the third German language version of the Father Abraham (Pierre Kartner) penned song. 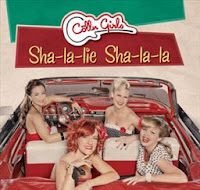 A cdsingle by the Cölln Girls is released by Pavement records (4012122801669) and also has two other songs.
The track is also available through various digital sources and it can be found on the various artists CD Karneval Der Stars folge 41.
Cölln Girls website has a soundclip
Read all about the ongoing avalanche of Sha La Lie's here at the Oslo collection.
Here's an amateur live recording (the tube)
Posted by Eurocovers at 10:14 AM No comments:

The Road To Baku - I Quattro 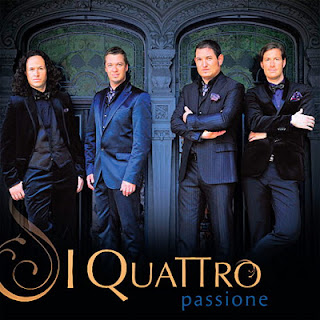 Swiss TV have announced the line-up of their National Final to be held on December 10. Eurocovers already did a bit about la Grandmère D'Eurovision Lys Assia in this post, and I'm glad she's through to the final 14.

One act Lys Assia will have to compete against is I Quattro, not the sons of Suzi (unfortunately), but a group of four tenors Roger Widmer, Simon Jäger, Damian Meier and Matthias Aeberhard.
Their debut album Passione from 2009 reportedly shifted 30.000 copies in Switzerland. This album includes a coverversion of Io Senza Te (Me without you), the 1981 Swiss entry originally by Peter, Sue and Marc*.
The song ended in 4th place and was a hit in Dutch as Het Is Nog Niet Voorbij (It's not over yet) for Willeke Alberti in 1982 and for Gerard Joling in 2008. (Both are Dutch Eurovision singers). A Swedish version was recorded by Kicki Moberg (Leva Utan Dig).
The song was covered in Italian, French, Dutch, Swedish, Finnish, Spanish and Norwegian.
Below is the Io Senza Te video from the 2009 TV show Die Grössten Schweizer Hits, which was more or less the breakthrough moment for I Quattro.

Update: I Quattro ended 4th in the Swiss national final. Read all about the winner here at the Baku Collection.

On the second I Quattro album Emozioni two Eurocovers can be found. Ne Partez Pas Sans Moi (Don't leave without me) is the Swiss 1988 winner by Celine Dion. Viver Senza Tei (To live without you) is the Swiss entry from 1989. It was performed by Furbaz, the group of Marie Louise Werth and the songs main claim to Eurovision History fame is that it's the only Swiss entry ever to be performed in Romansch, the language of the Graubünden area.
Emozioni also includes a coverversion of Lys Assia's Oh Mein Papa.
The third I Quattro album was their 2010 Christmas album Winterträume.

The I Quattro are sensitive boys: all their Eurocovers are about loneliness and stuff. So it's no surprise their Eurovision effort is titled Fragile. The song will be performed in English and is a big classical ballad you might expect from four tenors. 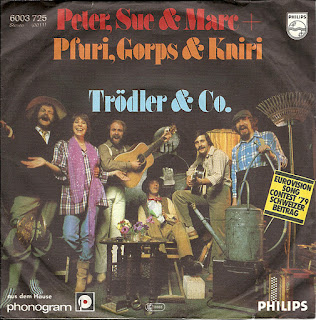 * Eurovision anoraks already knew this but if you didn't: Peter Sue and Marc are in the Eurovision History-Book-On-The-Shelf for participating four times (quite a feat in itself) in four different languages.
Their first entry Les Illusions De Nos Vingt Ans which was in French (12th in 1971). 1976 song Djambo Djambo was in English (4th place).
In 1979 German language song Trödler Und Company took them to 10th place, albeit with the help of some blokes called Pfuri, Gorps and Kniri and their assortment of garden utensils. (Oh, those golden days when Eurovision was only about the music....).
The final and arguably best Peter, Sue and Marc effort was Io Senza Te, sung in Italian and reaching 4th place in 1981. 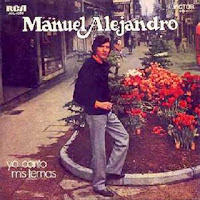 Congratulations are in order: Composer Manuel Alejandro receives a lifetime achievement award at this years Latin Grammy Awards.
Eurovision fans know him from two of Spains classic songs Yo Soy Aquel and Hablemos Del Amor, both performed by Raphael at the contest. Alejandro composed many of Raphaels hits.

Yo Soy Aquel, Spains 1966 Eurovision song is a classic that is still being recorded in this millenium. Check out this Eurocovers post for some interesting new versions.
The song also features in many incarnations of the Monte Christo TV series.
One of the most recent coverversions of Yo Soy Aquel is recorded by this years Russian Eurovision singer Alexej Vorobyev/Alex Sparrow, who recorded it for the Russian version of Monte Christo. 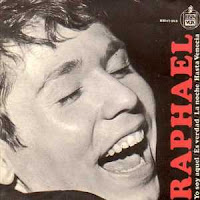 Posted by Eurocovers at 12:24 PM No comments: