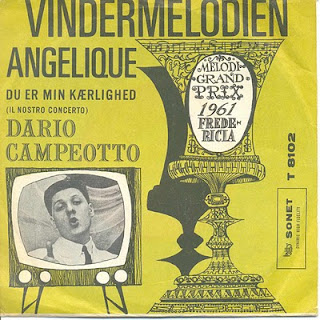 Let's take a short trip back to 1961. The 6th Eurovision song contest was held in Cannes, France. A record breaking 16 countries were present and the contest was won by Luxembourg. They hired French singer Jean Claude Pascal to do the job and his Nous Les Amoureux was the first of five Luxembourg victories.
But it's another song I want to rant about a bit here, as several versions have been frequenting my playlists recently.

Angelique
Angelique, written by Aksel V. Rasmussen, was the Danish entry. Danish Italian Dario Campeotto performed it and ended 5th.
Campeotto recorded the song in Danish, Italian and French and 40 years later also in English.
Angelique is one of the Danish entries that became an evergreen at home but also inspired a few international stars to record the song.

The song was covered in at least 8 languages with an Estonian version by Kalmer Tennosaar probably being the most exotic.
1958 Eurovision winner André Claveau recorded the song in French for his EP Les Amoureux De Minuit (Pathé Marconi EG 557).
Dario Campeotto himself recorded coverversions of several Italian entries Volare (1958), Piove (1959), Romantica (1960), Al Di Là (1961) and Uno Per Tutte (1963). 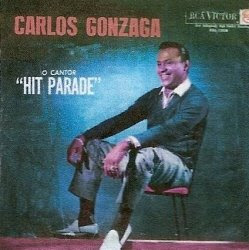 Brasil
I know of two Portuguese versions recorded in Brasil which were both originally released on good old 78 RPM discs.
Brasil had 78RPMs until the mid sixties and a few more will be featured here at Eurocovers soon. 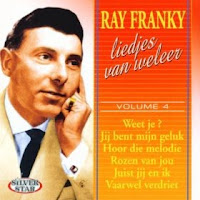 A Dutch, or rather Flemish version was recorded by Ray Franky (1917-2002). Ray Franky was a popular singer in Belgium sincejust after WWII and all through the 50's and 60's. He was the first Belgian artist ever who received a golden disc. His most popular song (from 100s) probably was Oh Heideroosje (Oh, Little Heather-rose).
Ray Franky also recorded 'n Beetje (Netherlands 1959) and Romantica (Italy 1960). 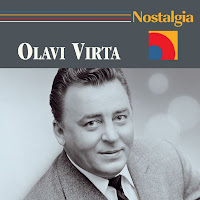 Finland
Of the 44 versions I have listed an impressive 19 are in Finnish (and only 6 in Danish).
I think the oldest of the Finnish ones is from a 7" inch single by Olavi Virta (Nor disk ND 16) but the Fins have been singing about Angelique in most decades since that version.
Other Finnish versions are by Matti Asla, Johnny Forsell, Kari Tapio and Raimo Sirkiä. See the list for more details.
Olavi Virta also recorded Finnish versions of Aprite Le Finestre, (Italy 56), Volare and T'En Va Pas (Switzerland 63)
- 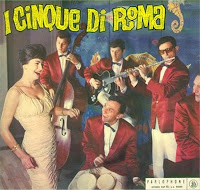 The last version here is by I Cinque Di Roma. I haven't been able to find much about them, but I did read they were regulars at Moçambique hotels. But they're probably from Rome. And there's five of them.
Their Angelique is a blend of English and Italian and was originally released on the LP I Cinque Di Roma (Parlophone). I just added it here because it's so utterly lovely.

I'm still looking for an English version by Colin Day (one of the Allisons, see this Eurocovers post) which was released as a b-side to his single Brasil (Parlophone R 4803).
There was a version written in the U.S. with lyrics by Dick Loring and Allen Hood for Ardmore Music*, but I don't know if any American singer ever recorded it. (do you?)

Posted by Eurocovers at 12:33 PM No comments: 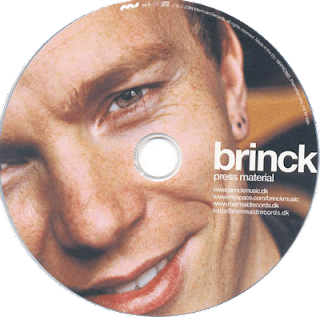 2010 is here and so is the new Eurovision season. Preselections, National finals, Melodi Grand Prixes or whatever you call them, are in full swing and a few days ago Denmark announced their 10 hopefuls. (info here at DR TV)

Song # 2, All About A Girl by Joakim Tranberg is written by the same team as last years Danish entry Believe Again: Lars Halvor Jensen, Martin Michael Larsson & Ronan Keating.
Ronan Keating is Mr. Rollercoaster of Boyzone, but you already knew that.
Of course there's 9 more songs and if the quality is as good as last year you should put some cash aside for the DMGP 2010 CD which will be released early februari.

Last year in Moscow the Danish entry performed by (Niels) Brinck ended 13th in the final, which is respectable but not exactly winning.
Believe Again scored a #1 hit in Denmark and got a platinum award. It also spent 2 weeks on the Swedish charts reaching # 44.
Who knows what could have been if there had been a proper release in Europe.
But almost a year later Believe Again is a winner at Eurocovers with the most successful coverversions of the year. Brinck homepage Brinck at The Moscow Collection 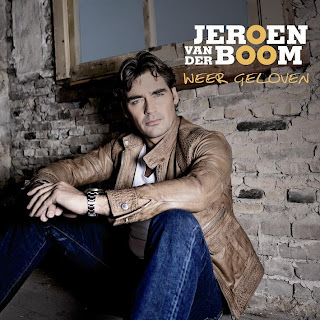 In november it was released as a cdsingle which also includes an acoustic version of the song.
In Christmas week the cdsingle took the #1 spot on the Dutch singles-sales top 100, a second # 1 hit for Jensen, Larsson & Keating.
Jeroen Van Der Boom Home 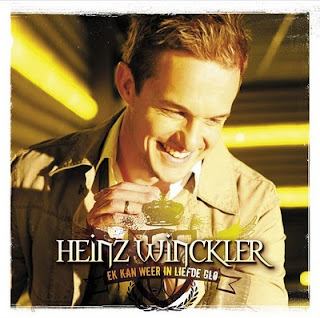 South Africa
Four South African singers have recorded Believe Again song in Afrikaans, but it's Heinz Winckler who gets the clearance to release it. Wincklers version, Ek Kan Weer In Liefde Glo (I can believe in love again), is released on his new album which is out on Selekt Musiek in September.

Heinz Winckler was the winner of the first Idols (Pop Idol) in South Africa in 2002. You probably have seen him on the (one off) international show World Idol in 2003, where he finished 4th performing Aerosmiths I Don't Wanna Miss A Thing. (The winner was Kurt Nilsen from Norway).
Winckler released three albums, all sung in English and the new one is the first with songs in Afrikaans (although five songs are in English).
You can see the video in this post. The clip is also at Heinz Winckler MySpace where you can listen to some earlier songs (in English).

The first Afrikaans coverversion of Believe Again was recorded by Henri Alant. The track is called Ek Glo (I believe) and was originally planned to be on Alant's forthcoming CD, which seems unlikely now.
Ek Glo is already issued on a 6-track advance promo CD Sal Jy by Artists Warehouse.
Two other artists in the battle for Believe Again were Kobus Muller and Francois Marais. 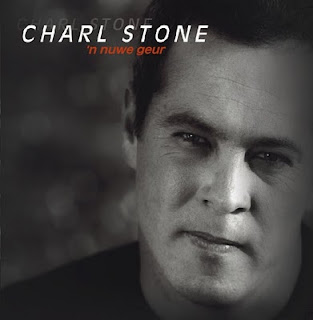 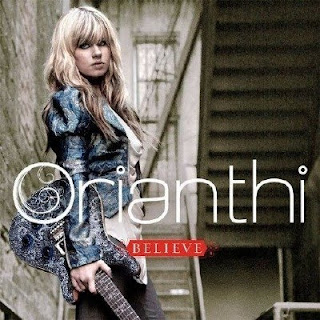 AustraliaOrianthi Panagharis is an Australian rock singer/guitarist who covers the song in English on her new album Believe (Geffen records).
The track is now titled Believe without the Again.
Read more about Orianthi at her website and find out about her Michael Jackson This Is It auditions at Popdirt.
The first single from Orianthi's album is According To You which is currently on the Australian charts (reaching #8 last december).
According To You also charts in the US Billboard hot 100 (currently at #26) and in various Canadian and Japanese charts.
Please note there's also a track called Believe on Orianthi's 2007 CD Violet Journey, but that's a different song. Obviously.

Special thanks to Roy & Songfestivalweblog and Dominique.
Parts of this article have already been featured at Eurocovers and the Moscow Collection.

Jeroen Van Der Booms cdsingle is available at BeaRecords who also stock the Brinck CD.
Both the Heinz Winckler & Charl Stone albums are available at Kalahari. (Heinz, Charl)
Digital versions are available at Rhythm Music Store. This South African download store offers mp3's worldwide, but I haven't tried it yet.
Orianthi's CD is available through all regular uni-ama-play-tunes webshops.
Posted by Eurocovers at 8:09 AM No comments: 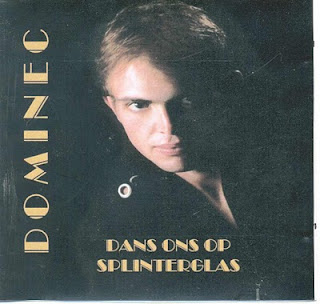 Eurocovers has regularly featured CD info of South African artists recording your favorite Eurovision songs. Often in the Afrikaans language, or other exotic tongues like English.
So, when all eyes are on South Africa in 2010 , because of the Football (Soccer….) World Championship, Eurocovers continues to track the Afrikaans music scene for those artists covering your favorite Eurovision tunes.

Many popular and up and coming artists have selected one or two Eurocovers for their latest albums but this is the first time an artist decided to fill a CD with Eurovision songs only. And an interesting eclectic collection it is.
Since the South African Eurocovers boom started Dominec has been working on his CD Dans Ons Op Splinterglas and now it finally sees the light.
15 tracks are here. All are songs that have graced the Eurovision stage in the past 30 years, the oldest being Peter Sue and Marcs Io Senza Te (Switzerland 1981).


You can listen to the songs at the recordcompanies pages Saturn records where there is also some order information. I don't have the details on international orders, but you can drop them a mail for information. 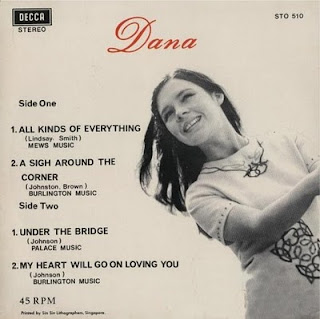 This year it's 40 years ago that Ireland clocked up their first Eurovision victory. Many followed.
18 year old Dana's sweet lullaby All Kinds Of Everything sums up a few of her favorite things and the song may be a bit too saccharine according to todays standards. Hard Rock Hallelujah it is not.

At the time, Eurovision was practically dead, or at least in need of a doctor. Only 12 countries participated in the contest in Amsterdam.
Eurovision was overhauled (pimped, the kids) with some new inventions that still last today. The infamous Postcards, an opening show and more attention to the stage, which provides artists with different 'backdrops'.

Dutch TV did their thing, but a good part of Eurovisions saviour is thanks to Dana success. Plus Mary Hopkin was there for the U.K. and the world was introduced to Julio Iglesias.

All Kinds Of Everything, written by Derry Lindsay and Jackie Smith, was an international hit and it's genuine evergreen material. It takes its rightful place in the list of Irish classics.
The song travelled well and was recorded in at least 13 languages including Mandarin, Afrikaans and Icelandic. Dana however, only recorded the song in English.
I'm not launching an All Kinds Of Everything Year here, but there will be a few Eurocovers post dedicated to this Irish Eurovision gem. 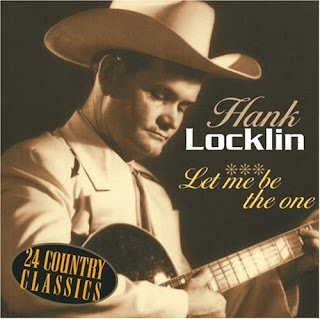 Hank Locklin
The seminal American version (if there is such a thing) was recorded by honky tonk / country singer Hank Locklin.
Hank Locklin scored over 30 hits in the U.S. country charts and crossed over to the pop charts with Please Help Me I'm Falling, a U.S. top 10 hit in 1960 which was also his biggest hit in Europe.
It was probably his popularity in Ireland that made him notice All Kinds Of Everything. Already in 1964 he recorded an album Irish Songs, Country Style with all your Irish Eyes & Danny Boys (re-issued on CD in 2006) 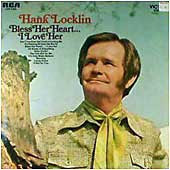 Hank Locklin recorded over 60 albums and his songs were recorded by many artists including Dolly Parton, Dean Martin and Willie Nelson. He died last year at the age of 91.

A Jamaican reggae version of All Kinds is in the Eurocovers post Jamaica, Can I Have Your Votes Please pt. 2. Two (English) versions from China are here and a video by Mia Kalember from Yugoslavia is here.
Posted by Eurocovers at 1:34 PM 1 comment: