Jamaica, can I have your votes please? pt. 2 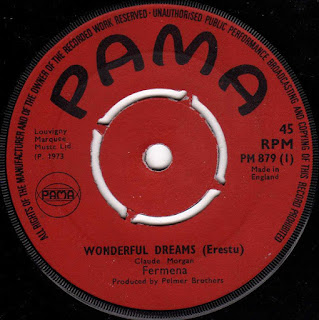 Note: This is a Eurocovers post from 2006. I made some changes and added a bit and moved it to the top.
You'll find links to the Youtube (audio) versions of some songs uploaded by other people who I wish to send a big THANKS here.

Here's some more stuff from Jamaica.
Most Jamaican recordings I found are by male singers.
There are hardly any versions by female singers and I think this reflected the state of the Jamaican music business in the 60s and 70s.
And if I find something with a girly name (Lynn, Ambelique) they turn out to be men too.

A popular record is 'All kinds of everything' by Peggy and the Cimmarons. Her version of the 1970 Irish winner by Dana  has a sort of upbeat feel which is both charming and innocent. (Youtube audio)
I think it's at least as good as the original.
The original 7"inch single features the vocal version and an instrumental (Dub) version by Carl Levey (Levy) and the Cimmarons  (Dub Youtube Audio)
(Trojan TR 7752, Jamaica 1970)
The single was released in several other countries too, sometimes only mentioning Peggy or spelling Cimmarons as Cimarrons.

Another Irish winner that got the reggae makeover is Johnny Logans 1987 song 'Hold Me Now' by Tanya Stephens. (Youtube audio). Again, the b-side is a dub version of the song.
(BMR records 7024, made in Jamaica, 1987)
I found this track on a compilation album 'Pure Lovers' (Jetstar Phonographic records) and it was also released on a Tanya Stephens 12"inch single.

Fermena - Wonderful Dreams (Tu te reconnaitras, Luxembourg 1973)
+ b-side dub version by Ranny Williams All Stars
- 7"inch single (PAMA PM 879 UK)
The subtitle is Erestu (on the label), which is odd, as that was another song from the 1973 contest.
Fermena is Fermena Edwards from Jamaica. Only three singles are known, and two are Eurocovers of Luxembourgian winners.

Here's some more versions by female singers from Jamaica.
A full post on elusive Jamaican singer Elaine Baker and her Puppet On A String is here.
Plus on LP Soul And Ska (Island ILP 968) by Joyce Bond there's a 'Puppet on a string', the 1967 winner orginally by Sandie Shaw.

P.S. A Jamaican interpretation of Riki Sorsa's Reggae O.K. still has to be found………
Posted by Eurocovers at 6:48 AM 1 comment: