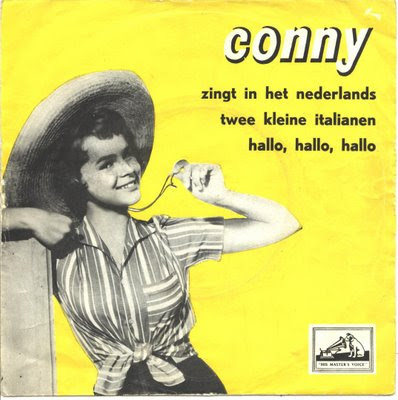 O.K., I'm a bit late, but belated best wishes go to Conny Froboess who celebrated her 65th birthday last month.
Conny Froboess was a German teen idol in the late 50s and early 60's and scored hitsingles and hitmovies in several European countries.
Only eight years old she scored her first hit with Pack die Badehose ein, a chirpy song about packing up your swimsuit for a day out at the beach. The song, written by her father, was covered in many languages in every beach loving country.

Hits like Teenager Melodie, Kleine Lucienne and Midi Midinette followed but it's of course the Eurovision entry Zwei kleine Italiener that remains her biggest evergreen.
Conny Froboess recorded the song in German, Dutch (pictured), English and Italian. A rumoured French version has not yet emerged.
The song only ended 6th at the contest but it became a big hit in Europe. I blame Conny for my love affair with Eurovision as I was exposed to the song while happily frolicking in the womb. It was a #1 hit in my country when I was born.
Zwei kleine Italiener is written by Christian Bruhn (Music) and Georg Buschor (lyrics)


Coverversions
Zwei kleine Italiener is a top 20 most covered Eurosong with currently 105 coverversions listed. The most famous cover is of course by the other Connie, Connie Francis, who recorded the song in Italian (single MGM K 2065). The song was covered in at least 12 languages, but I haven't found an English coverversion yet.
Eurovision singers that have covered Zwei kleine Italiener are Gitte, Lisa Del Bo, Mary Roos, Mathé Altéry, Colette Déreal, Anita Thallaug (see below), Monica Aspelund (with the Four Cats) and the German group Wind (although no original members were in the group when they recorded the Italiener). 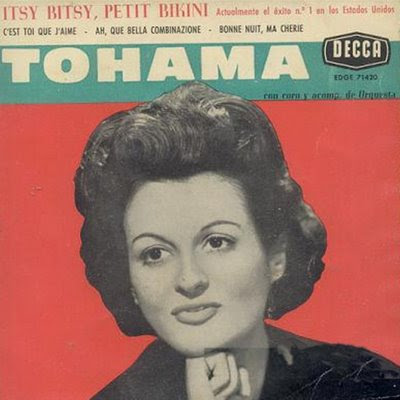 Tohama
Tohama (1920 - 1995) was born in France as Nadia Altman, and the age of 12 she moved to Brussels, Belgium.
Her father was painter Alexandre Altman who'se work I don't know, but he has streets named after him, so he must have done something right.
Nadia adopted the name Tohama (Tahitian for I love you) as her artists name in 1937, the year she released her first record Le Vent M'a Dit Un Chanson. (A song made famous in German by Zarah Leander).

Tohama released many 78's from the late 30's to well into the 50's, both romantic songs and comedy songs including popular hits like Gigi, Le petit cousin, Suzanna Youpi You La la and Dis-moi oui, Dis-moi non. Even though she toured the world her fame was restricted to France, Belgium and Canada. Her work up to the mid 50's has been released on several compilation CDs but the Eurocovers from the early 60's are hard to find items on the original vinyl releases only.
At the dawn of the 70's she packed in her career and Tohama died in 1995 aged 75.

Another celebrated version is the Swedish version by Tina och Marina. Tina and Marina named themselves after the characters in the song. It was released on various EPs and singles including a solo EP by Margareta Rudebro, who is Tina (Karussell).

Zwei kleine Italiener - The List
As usual, I have prepared a list with all versions of the song I know about. There are details on Conny's own versions and on 105 coverversions. It's a word document and you can get it  here (Updated April 2011)
Looking for…As I am a sucker for Eurocovers from Brasil there's one version of the Italiener I'm especially looking for. A Portuguese language version titled Os dois Italianinhos was released on an EP in 1963 by Brasilian singer Meire Pavão with Conjunto Alvorada.

EUROCOVERS vs THE MAN
The Man has got to Eurocovers. Blogger has been forced to remove some Eurocovers posts from the blog. I don't exactly know who filed the complaints (the promised letters haven't arrived yet) but I'm not going to make too big a deal of it.
The main posts that have been removed are the Belgrade Weeks post about Lane Moje (Serbia Montenegro 2004) and the 10.000 coverversions top post about Domenico Modugno's Volare.
Especially the latter is a shame as it's a bit silly to have a top 10 without it's #1.
On the bright side, I know of several artists who are in the process of recording Volare after they read the Eurocovers posts about it.
Concluding: Some posts may be gone and therefor some links may not work. I still hope to bring you interesting articles on Eurocovering artists, the latest release news and must read web tips.
Posted by Eurocovers at 10:03 AM No comments: