Sad news from the Netherlands, Corry Brokken, legendary singer and Eurovision star has died at the age of 83. 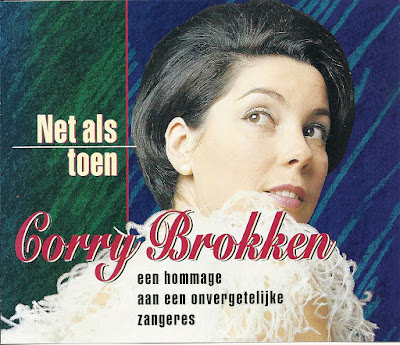 Corry Brokken won the 2nd ever Eurovision Song Contest with her song Net Als Toen (Just like old times). She  participated in 1956 with Voorgoed Voorbij (Over forever) and in 1958 with Heel De Wereld (The whole wide world).
In 1976 she was the host of the contest in The Hague. I remember she congratulated the winners as Happy England, and nobody complained...


Corry Brokkens career started in the early 50’s, when she performed on many Dutch radio shows. Eurovision followed three times but it was in the early sixties she scored her biggest hits, Milord (The Edith Piaf song), Mijn Ideaal (Tu Te Laisses Aller) and La Mamma (both Charles Azanavour songs).
She also recorded many songs in German and frequented many German TV shows in the 60's.


Corry Brokken continued recording critically acclaimed albums up to the mid 70’s.
After she was finished with music Brokken started a career in law at the age of 42, resulting in becoming a judge in 1991.
But music remained a part of her life, and following the success of the 1994 compilation a new album Nooit Gedacht (Never thought) was released in 1996.
Brokken disappeared from public life in 2008 after serious health issues.

1956 Voorgoed Voorbij
Each country had two songs in the first Eurovision song contest. The second song for the Netherlands was Voorgoed Voorbij by Corry Brokken. The song was never released.
Update 2017: A new 3CD titled Milord has been released featuring 75 tracks. It includes Voorgoed Voorbij for the first time on any record. The recording sounds like it's the Eurovision recording (it has the same arrangement and vocals) but it's remastered/patched up very well, sounding like a studio recording. 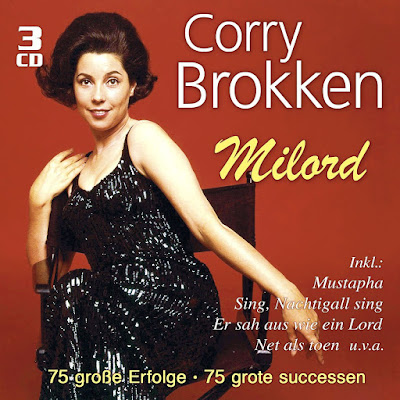 1958 Heel De Wereld
The third and last Eurovision adventure didn’t fare too well for Corry. Her Heel De Wereld finished (shared) last.
In the National Final she again finished first and second, the second song Weet Je (Do you know) was released on the b-side of Heel De Wereld.

She also recorded a coverversion of Goedenacht Marjolein, the song that ended 4th in the Dutch final (sung by Bruce Low). Brokkens version ended up as the b-side to her 1966 single Zo Gaat Het Met Meisjes Altijd (That’s how it goes with girls) (Philips JF 327 979)

In 1959 Corry Brokken entered the Dutch National Final again. Duet Mijn hart En Ik (My Heart And I, with Bruce Low) finished third, Iedere Dag Met Jou (Every day with you) finished 4th .
Neither were released by Corry Brokken.