The Olsen Brothers Fly Again, On The Wings Of Love. 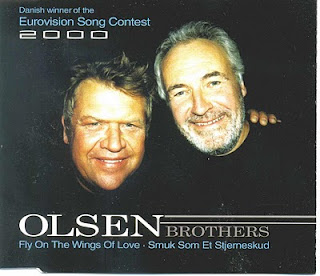 Eurovision winners The Olsen Brothers (Denmark 2000) will release a new album in may, Eurovision week.

The album Wings Of Eurovision will include 12 Eurovision covers and a new version of their own entry Fly On The Wings Of Love.

Not many suprises there, even the most avid Eurovision dodger will know the songs.

Most entries tackled by the Brødrene were international hits, and there are eight winners present. Maybe Non So Che Darei is the odd one out that even some Eurovision fans may have forgotten about.

Please read the updated tracklist and more info at this new Eurocovers post.
Shop for The Olsen Brothers CDs at BeaRecords
Posted by Eurocovers at 5:41 PM No comments:

Those Kids Of Today: Nútímabörn 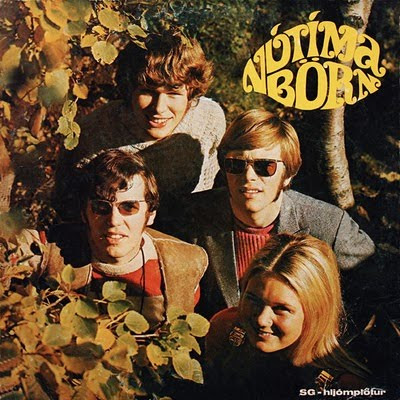 In Februari 2008 I did a Eurocovers post about some seemingly non traceable Icelandic Eurocovers including one from an LP with this fantastic sleeve.
Good things come to those who wait, so I'm happy to be able to present one of the songs here.


The ultra cool looking band called Nútímabörn (Modern kids) recorded a version of the Eurovision winner La La La for their LP Nútímabörn. As given away by the sleeve, the song is a bit more mellow, slightly flower power typical late 60's pop. And of course it's utterly lovely.

Very Special Thanks to Dr. Gunni.
You can watch Dr. Gunni in action here. It's the first of four shows reviewing the 2010 Eurovision entries. Dr, Gunni is on the panel and the show is hosted by Paul Oscar, King Of The Couch.
For another track by Nútímabörn (We Can Work It Out in Icelandic) check out Dr. Gunni's fab webspace at this page and scroll down halfway. It's part of the Bítlarnir á íslensku series. There's also a great version Fool On The Hill by Björk as a 11 y.o. just added.
The picture sleeve is from this wiki page.
More La La La at Eurocovers: Lesley Gore, Merit Hemmingson, Leelo Karp

Posted by Eurocovers at 8:53 PM No comments: 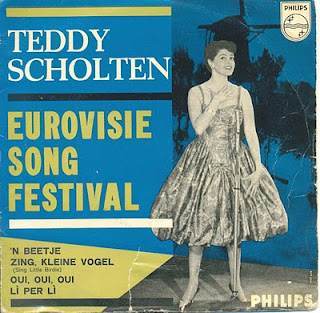 Another sad goodbye in Eurovisionland. Teddy Scholten, winner of the 1959 Eurovision Song Contest died last week at the age of 83.
She was one of the popular stars of 50's and 60's Dutch radio and television entertainment. In the 70's and 80's she worked for the Red Cross.

Even though she was a frequent face & voice in Dutch entertainment, Teddy Scholten wasn't a top 40 singer, and people remember 'n Beetje, the 1959 winning Eurovision song best.
The reception Teddy Scholten received when she arrived back home was unprecedented with 100's of people at Schiphol Airport with banners and flowers and set the tone for heroes' arrivals in years to come.

'n Beetje (A little bit), written by Dick Schallies and Willy van Hemert, was the 2nd victory for the Netherlands at only the 4th Eurovision (how times have changed). It was a #4 hit on the (then monthly) Dutch charts (4 months on chart).
Teddy Scholten recorded two Dutch versions of the song and also versions in German (Sei ehrlich), French (Un p'tit peu) and Italian (Un poco).
The Italian version was a top 20 chart hit in Italy.
Teddy Scholten sang a Swedish version Om Varen on Swedish radio (1959, details wanted) but it was never recorded by Teddy. An English version, The Moment, was also written but never recorded.
In the preselection (Nationaal Song Festival) 'n Beetje was also sung by John de Mol (sr.) (released on 7" Telefunken UH 9323A). His version was a #3 hit (3 months on chart)

Eurocovers
The only Eurocovers recorded by Teddy Scholten are from 1959, her own Eurovision year.
For the Post Eurovision releases of 'n Beetje she recorded the French entry Oui Oui Oui Oui and the British entry Sing Little Birdie (with husband Henk Scholten).
Sing Little Birdie, the #2 at the contest, originally recorded by Pearl Carr & Teddy Johnson, was recorded as the b-side to the 'international' versions. 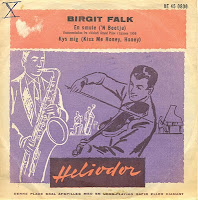 En Smule
I have over 40 coverversions listed of 'n Beetje, most Dutch, many instrumental and a handful of other languages.
Remarkable is the popularity of the song with Danish recording artists from the era.
There are at least seven full Danish versions of the song, all titled En Smule, and there are a few medleys and instrumentals also recorded in Denmark.

Special thanks to Mikael.

'n Beetje - Document.
I have uploaded a list with all details on Teddy Scholtens 'n Beetje releases and 47 coverversions of the song. It's a word document.
In the Eurocovers 2007 Finweeks a Finnish version was / is featured. A Swedish version can be found in the Marie Dieke Eurocovers post from November 2006. For an Italian version by Carla Boni, check this Eurocovers post. 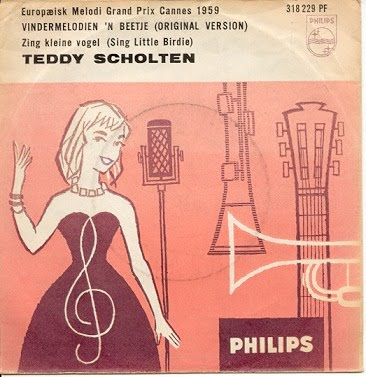 Posted by Eurocovers at 6:55 AM No comments:

Spring Is In The Air, Happy Birthday Agnetha 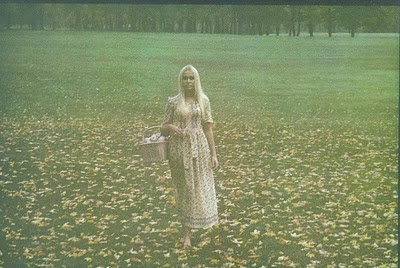 Happy 60th Birthday Agnetha! Seen here in a field* of her own on her 1969 LP Som Jag Är. The LP includes Sov Gott Min Lilla Vän, a coverversion of Un Jour, Un Enfant by Frida Boccara, one of the 4 winners of Eurovision 1969.
* I know, the field looks a bit autumny 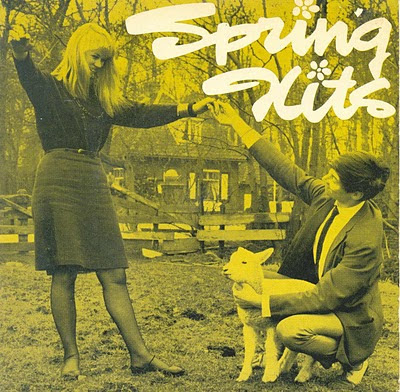 Sun is shining. Take your little lamb out for a walk, the girls will love you.
Poupée De Cire, Poupée De Son (lux 1965) - Ann Morre and Jean Claudric Ensemble
Posted by Eurocovers at 7:50 AM No comments: