Eternamente Blu, Volare in the 20's

In the past 15 odd years Eurocovers has been writing a lot about coverversions of Nel Blu Dipinto Di Blu (Volare), the 1958 Sanremo winner and Eurovision entry by Domenico Modugno. It's an obsession.
If you use this link you'll see most of the earlier posts.
Here's just a quick runthrough of new coverversions just released, showing that Mr. Volare is still alive and kicking. With listening links for your convenience. 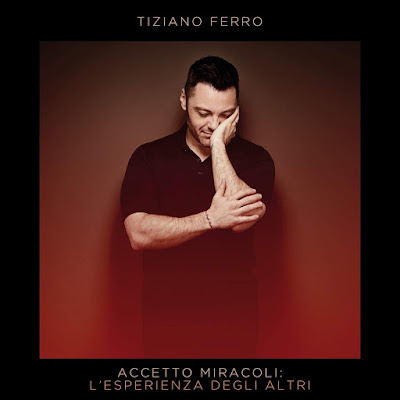 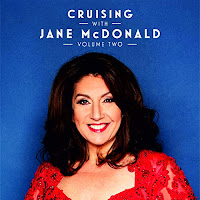 In February Italian heartthrob and superstar Tiziano Ferro was a guest performer at the Sanremo Festival performing Nel Blu Dipinto Di Blu.
Now he has released his quite wonderful new album Accetto Miracoli: L'Esperienza Degli Altri and in includes a similar version of the Domenico Modugno classic. (out on 2CD, LP and digital)
Youtube Audio. Sanremo performance via RaiPlay
It took Brazil’s former Minister of Culture (and music legend) Gilberto Gil over 60 albums to give us a version of Volare, recorded with his granddaughter Flor. They first performed the song back in April as a message of support and strength to the Italian people hit by the pandemic. Now they recorded a studio version for a digital EP De Avô Pra Neta (digital EP) Youtube Audio, Original performance 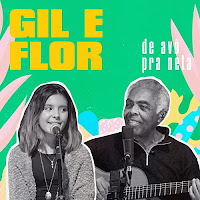 Another familiar name, Jane McDonald, Queen of British Cruiseships,  also released a version of Volare (in English) on her new album Cruising with Jane McDonald, Vol. 2. (CD and digital) Youtube Audio
Russell Watson just scored a U.K. top 10 album with his album 20 (CD and digital).
This includes a new recording of Volare. He previously recorded it with André Rieu (2003, CD Zauber des Musik 3) the Royal Philharmonic (2008, CD The Platinum Collection), and with Aled Jones (2018, CD In Harmony). Youtube Audio
Some other 2020 Volares are by:
Franco Corso (CD Vincerò, to be released Dec 1) Website listening
- Corso also recorded it in 2005 but this is a new recording
Imai Shunshuke (今井俊輔, CD I Am I 2020 Volare) Youtube audio
Claudio Capeo (CD Penso A Te) (streaming/shopping link)
Posted by Eurocovers at 10:12 AM No comments:

This week legendary Welsh songstress Shirley Bassey releases her final album I Owe It All To You. A modestly titled album (and song) thanking her fans for their loyalty over the years. The album has new songs, a few coverversions and some old personal favorites of Shirley reimagined. 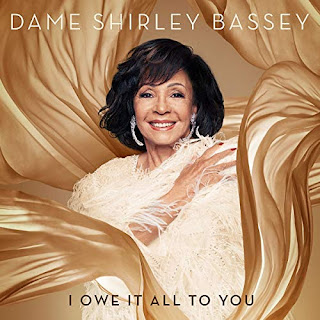 In the back of my mind I always knew Goldfinger, Big Spender and Diamonds Are Forever but the first Shirley Bassey record that made a real impact on me was the 1978 disco version of This Is My Life (La Vita). She originally performed that song, also performed by Elio Gandolfi, in the 1968 SanRemo contest but it didn’t make it to the final. Below is the wonderful 1968 SanRemo performance. 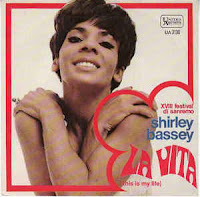 To be fair, I wasn’t a massive fanboy at the time, but I learned to love her later. In the 80’s and 90's (second hand bought) singles started piling up to the point she got her own section in my record collection. (An honour not bestowed on many)
I was overjoyed when I found the Italian single with Diamonds Are Forever sung in Italian (Vivo Di Diamanti).
I was stunned by her cooperation with Yello (The Rhythm Divine) and adored her Propellerheads hit History Repeating*. And, no surprise, I also love The Performance from 2010 with new songs by cool people like Rufus Wainwright, The Manics, Gary Barlow and the Pet Shop Boys.
There’s no Eurovision tune on the new album, so here’s the videoclip of the only Eurovision song she covered, Dio Come Ti Amo (Italy 1966, Domenico Modugno). 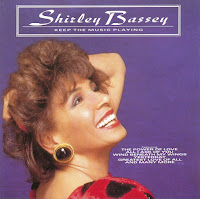 Dio Come Ti-Amo (Oh God How Much I Love You) was first released in 1991 on the album Keep The Music Playing. On the original LP release Modugno is credited as D. Medunidoleo.
She also recorded another Modugno song Chi Si Vuol Bene Come Noi..., a 1968 single for Bassey sung in Italian.
Shirley Bassey recorded several songs from the Great Italian Songbook so there may be some more SanRemo covers in there, I don’t know (do you?).
Update: Jezahel from her 1972 LP And I Love You So was a SanRemo entry for Delirium (as Jesahel), finishing 6th).
Another Eurovision legend, Udo Jürgens, also supplied Bassey with (at least) two songs.
Reach For The Stars from 1961 (originally Woher Ich Auch Komm’) with English lyrics by Norman Newell**.
If I Never Sing Another Song (or. Illusionen by Alexandra, 1967 and Udo Jürgens himself, 1974) was recorded by Shirley Bassey in 1976. You can find a nice article (and lovely pics) about Udo meeting Shirley here at the Shirley Bassey Blog.
* Jamala, Eurovision 1944, also did that one, on her album For Every Heart. (video)
** Trivia alert: Norman Newell wrote the English part of the lyrics to the 1963 Swiss entry Vielleicht Geschieht Ein Wunder by Carmela Corren which was performed in German and English at the contest (and on record). 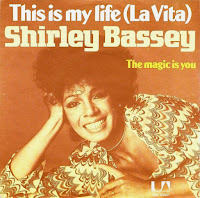 Shirley Bassey website
Shirley Bassey facebook
The Shirley Bassey Blog
I Owe It All To You is released on November 6 on CD, deluxe CD (with book but no extra tracks) and digital. (Shopping)
More Eurocovers posts about Dio Come Ti Amo include Elvis & Vega, Verdelle Smith, Perla, Sonny J., and the 10000 coverversions project #9.

Posted by Eurocovers at 10:00 AM No comments: