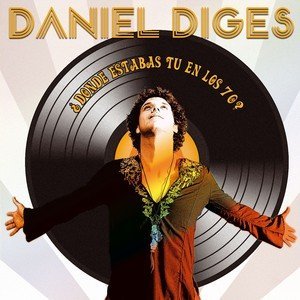 Spanish Eurovision singer Daniel Diges who represented Spain with Algo Pequeñito in the 2010 Oslo Eurovision has released a coverversions album titled ¿Dónde Estabas Tú En Los 70?.
-
Young Daniel wasn't born then, but I guess he managed to delve into his parents record collection and come up with 13 popular hits of the golden age of disco and disposable pop gems.
Unfortunately he skipped the disco ones so we are left with mostly Spanish (holiday) classics and a handful of worldwide evergreens.
A Eurocover is present, yay!. Eres Tu originally by Mocedades ended 2nd in the 1973 contest and became a worldwide success including a US top 10 hit. Eres Tu is also in the top 10 most covered Eurovision songs.
The 70's cover album is Diges' 2nd album and it is out now in the Spanish shops. It's released by Warner music Spain and also availble through th'i-tunes and other digitessen. 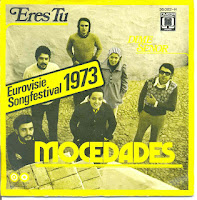 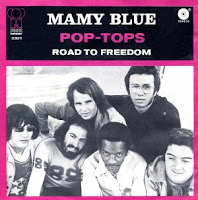 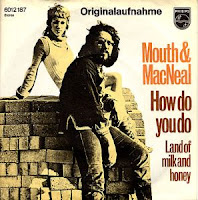 11. Ven Sin Temor
- A coverversion of Mouth and MacNeals How Do You Do.  The duo had a worldwide hit with it in 1973, including a US top 10 hit. They went on to Eurovision in 1974 and ended 3rd with I See A Star.
12. Delilah
- The Tom Jones hit from 1968
13. Mammy Blue
- A much covered song, the Los Pop Tops version was probably the biggest hit. The song is written by Hubert Giraud, composer of the 3rd Eurovision winner Dors Mon Amour***.


There are a zillion Eres Tu's at Eurocovers. You'll find most of them with this search link.
* Micky entered Eurovision in 1977 with Enseñame A Cantar, find a Tex-Mex Eurocovers tribute here.
** More about Azucar Moreno and the Bandido covers here.
*** Find some Tango Argentina Eurocovers of Dors Mon Amour here.
What's Spain doing in 2012? Find out at the Baku Collection.

Special thanks to José Antonio
Posted by Eurocovers at 11:25 AM No comments: 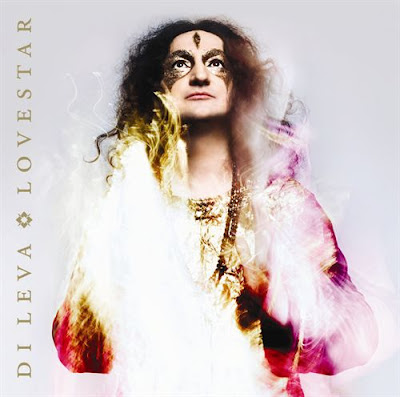 Please vote wisely tonight.
Di Leva DTG!
Shame On You!
Thomas Di Leva, Swedens Astral Greengrocer and mighty tunesmith was in the 2nd heat of the Swedish Melodifestivalen with Ge Aldrig Upp (Never give up). But he ended only fifth grrrr....
Even though he started his recording career in 1980, this is the first time Di Leva joins the Melodifestivalen fold. I don't know if he tried before though. (they have like 2000 applicants each year)
The first song I noticed was the brilliant Naked Number One which was on a late night not-too-high MTV rotation in 1993. They didn't have the record at the Dutch local record stores of course (it was the pre-internet days kids) so I sort of forgot about it.
Then I re-discovered Di Leva in 2002 when I more or less accidentally celebrated the 750th anniversary of Stockholm in 2002.
I attended a free Di Leva concert at the week long festivities and I was won over by this excentric loveable creature in a kaftan on stage. He was throwing fruit in the audience, drank water from his trademark garden watering can and was deliberating about love, vegetables, the universe and more love. But it was the perfect Pop tunes that blew me away and made me rush to the record store to buy the back catalogue. He never recorded a Eurocover, but in his 17 album career he recorded one album with coverversions. Lovestar from 2010 (pictured above) features coverversions ranging from Neil Youngs Rockin' In The Free World and Depeche Mode's Personal Jesus to Limahls Neverending Story and ABBA's The Winner Takes It All. Although the choice of songs is eclectic the album is held together by a strong electronic pop sound.
Other recomended Di Leva songs: Miraklet (my fave), Naked Number One, Everyone Is Jesus, Ingen Kan Köpa Livet, Adam and Eve, Svarta Pärlan I London (or the English version Black Pearl In London), Vem ska jag tro på, Frukt Grönt Och Vatten and the list goes on. A recommended compilation is 1999's För Sverige I Rymden. Di Leva recorded both in Swedish and in English.
Posted by Eurocovers at 3:50 PM No comments: 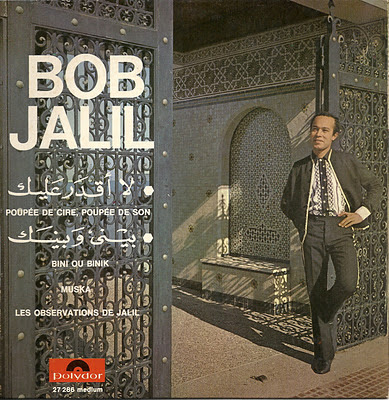 Ever since I found out about this Bob Jalil EP I've been trying to get hold of this mysterious version of Poupée De Cire, Poupée De Son, the 1965 Eurovision winner. I wasn't able to find out much about it, but thanks to the alert system on the mighty bay, I was able to buy a scruffy copy of this elusive record.
After a thorough cleaning and polishing session it's finally here, and needless to say, c'est fab. There's some additional campfire crackling as a bonus, but all tracks are worth listening to.

All four tracks are wonderful vintage mid 60's beat with the groaning vocals, twangy guitars, messy beats and jangly organs. The a-side tracks are both in Moroccan Arabic, the tracks on the flip are in French.
Morocco singer Bob Jalil is also known as Abdel Jalil Bennis or just Jalil Bennis and has recorded with the Golden Hands and with the Star Orchestra.
I've read somewhere the title track translates as La Akdar Alik, but if anyone can help me with some more info that would be great. The title in Arabic is لا أقدر عليك, the other track in Arabic is بيني وبينك
All songs on this EP are recorded with L'Orchestre Star Melody.
There's a small Bob Jalil blog with some pictures here, but it hasn't been updated since 2007. 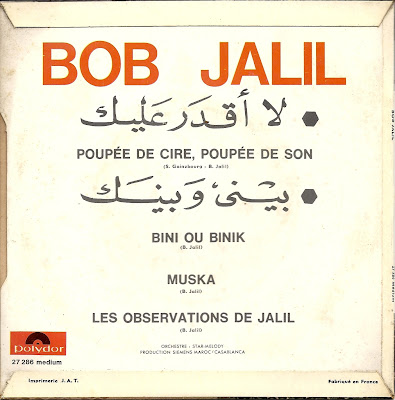 بوب الجليل
Poupée De Cire, Poupée De Son, a popular Eurocovers readers favorite,  was the winner of the Eurovision Song Contest in 1965 for Luxembourg. The song is written by Serge Gainsbourg and was performed by France Gall.

Special thanks to Rick

Updated list
I have updated the list of versions of Poupée... and uploaded it here. It is a word document listing all versions by France Gall and all the coverversions I know of. Currently 193 coverversions are listed.
You can find more posts about the song checking this keyword link.
e-mail me if you want the list.
Posted by Eurocovers at 11:30 AM No comments:

---------------------This is a live clip of Celtic Woman performing Nocturne, the 1995 Eurovision winner originally by Secret Garden. Celtic Women is an all female music phenomenon founded by Riverdance director David Downes.
The ensemble have been performing all over the world since 2004 and have released 11 albums give or take. 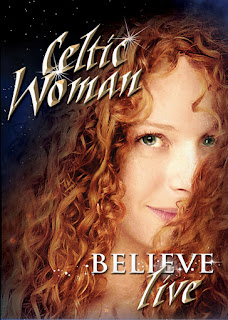 Believe
Nocturne can be found on the new by Celtic Woman CD Believe. This edition has been released this week and should not be confused with the album Believe that was a Japan only issue from May 2011. (that one does not have Nocturne).
Believe can also be found as a CD/DVD release with the DVD being a live concert from the Fox Theatre in Atlanta, Georgia (US). The live DVD also includes a performance of Nocturne.

The vocals on Nocturne are by Chloë Agnew with Máiréad Nesbitt on the violin.
As you already noticed, CW's Nocturne has a lot more lyrics than the original English* version, which only has 40 seconds of singing . I don't know if the additional were written by the original lyricist Petter Skavland or by someone else.
(see comments, Thanks Jacob)

Celtic Woman will be on tour in North America in Februari through April and in Europe in May and June with dates in Germany, Austria, Switzerland, Belgium and The Netherlands 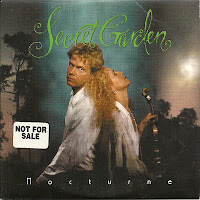 Nocturne is not the first Eurocover recorded by Celtic Woman. The Voice, the 1996 winner for Ireland originally by Eimear Quinn can be found on their 2007 album A New Journey.
Celtic Woman albums are released by Manhattan Records / EMI and are available in most webshops and of course at your favorite digitessen...

* Secret Garden recorded the song in Norwegian (as performed at Eurovision) and in English. It is the most covered Eurovision song since the 1990 with around 50 versions listed.
The music for Nocturne is written by Rolf Løvland who also wrote 1985 winner La Det Swinge and contemporary evergreen You Raise Me Up (with lyrics by Brendan Graham).

Celtic Woman Website
Another Nocturne at Eurocovers by Døsty Cåwshit.
Who represents Norway in 2012? Find out more at the Baku Collection.
Posted by Eurocovers at 2:41 PM 2 comments: