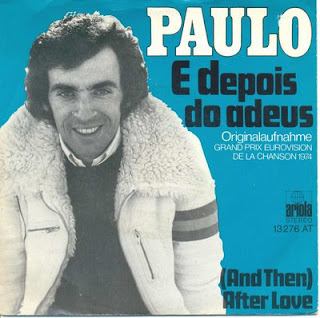 This week Portugal and the Eurovision nation have to say a sad adeus to José Calvário.
The Portuguese composer and orchestra leader died at the age of 58.

Calvário and his Orchestra worked with many popular Portuguese artists and he produced several hitsongs and albums. He also composed and recorded scores for Portuguese cinema.
I won't be trying to present a full life story on José Calvário here, I don't know enough for that. It's just a small tribute to a milestone in Portuguese music and an opportunity to get re-acquainted with E Depois Do Adeus.

In Eurovision world he is most known as the composer of the portuguese entries of 1972, 1974 and 1988. He also conducted the orchestra for the Portuguese Eurovision entries in 1974, 1977, 1985 and 1988 and recorded and produced the entries records on several occasions. 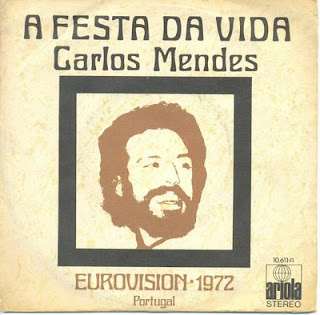 The 1972 entry A Festa Da Vida is a well known song, the 1988 composition Voltarei came into trouble for sounding a bit too much like Save Your Kisses For Me, but the most famous of Calvário's Eurovision compositions is E Depois Do Adeus (After the goodbye).

The Revolution
E Depois Do Adeus, (lyrics José Niza) performed by Paulo De Carvalho in Eurovision gained legendary status by the role it played in the Carnation Revolution in april 1974 in Portugal.
However the role of E Depois is somewhat overplayed or at least misinterpreted at some sources. It did not start the revolution, and certainly not on Eurovision night and the song has no revolutionary lyrics, but an airing of E Depois on radio on April 24 was a starting signal for revolutionary activities.
Needless to say, E Depois Do Adeus gained immortal status in Portuguese music and has been covered by several artists, many in recent years. You'll find a few below.

José Calvário Eurocovers
As an orchestra leader Calvário recorded two albums of interest to Eurocovers fans. Especially interesting is the 1973 LP Eurovisão - 10 Canções which features 10 orchestral covers (with some chorus) of 10 songs from the 1973 contest (Orfeu STAT 015)*
Another album is recorded by Calvário with the London Philharmonic in 1993: Saudades vol. III. This includes 7 Portuguese entries from 1965 to 1982, some in medleys, others in full.
The album is currently available at CD-Go
A vocal version of E Depois Do Adeus was recorded by Calvário and his orchestra (vocals but no lyrics) but I have no release details on that. 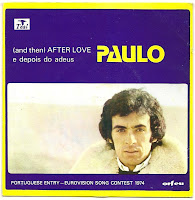 UPDATE: The Orchestral version with chorus vocals can be found on the Mozambique EP of the original entry by Paolo. This EP (Orfeu KSAT 507, pictured left) has the Portuguese, English and said Orchestral version. (Thanks Rick!!!)
* I don´t have the LP or know the exact tracklist, but it includes the 1973 entries of entries of Finland, France, Germany, Israel, Italy, Luxembourg, Monaco, Spain, Sweden, and UK (♫ below)

The version by Sebastião Manuel (from Brasil) from the VA LP O Meu Rico Portugues, the recording is from 1975 and was used in a Brasilian TV series in the 70's. The track by Paula Oliveira & Bernardo Moreira is from 2005 album Lisboa Que Adormece and the Radio Clube Nora version is from 2006 (quite great album Ver Sons) 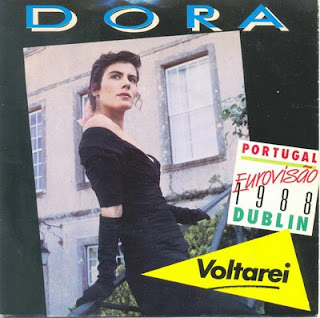 E Depois Do Adeus was also covered by vocal groups Divinus, Grupo Verde Vinho & Vozes Da Radio, by a trio of Eurovision collegues Carlos Mendes, Fernando Tordo with original singer Paulo De Carvalho and by David Ripado of Operacão Triunfo.
I'm still looking for the version by Ester De Abreu (1977 LP Amar Amar).
Of A Festa Da Vida (1972) I only know of an instrumental by Shegundo Galarza.
Of 1988's Voltarei I don't have any cover info. 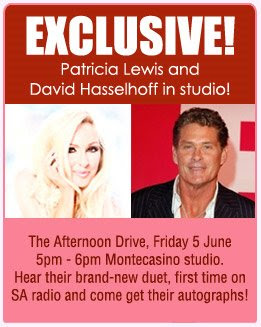 It's all pictured a bit tragic and sensionalist in the South African press as they claim it's the last song national treasure Patricia Lewis will ever sing. She's diagnosed with tumors on her vocal chords and will have surgeory. And "it's possible she can never sing after the operation".
Let's all just hope all goes well so we can enjoy some more of Patricia's fabulous schlager-pop albums.

They recorded two songs together and one of them is Miss Kiss Kiss Bang (sung in Afrikaans), this years German Eurovision entry by Alex Swings Oscar Sings

David Hasselhoff is in South Africa to play around with some white sharks with big teeth to lively up his U.S. reality TV show that is currently being filmed. He re-scheduled his SA trip because of his close friend Patricia Lewis' impending operation.

Last friday they performed their new songs together at a special performance outside the Montecasino recording studio's near Johannesburg.

Patricia Lewis covered many Eurovision songs. On her last album Net Soos In Drome she recorded Swedish 2008 song Hero and two Melodifestivalen songs. (soundclips)
Also check Patricia Lewis at Eurocovers for older material.
For Hasselhoff it's his first Eurocover.
update: Miss Kiss Kiss Bang and As I Am the other songs Lewis recorded with Hasselhoff will be released on a repackaged issue of the Net Soos In Drome CD.

Original performers of Miss Kiss Kiss Bang, Alex Swings Oscar Sings, have already had their moment of worldwide superfamedom in the Oprah show - The Worlds Got Talent.

sources: News24.com, The Hoff News and thanks to Roy.
You can shop for most Patricia Lewis albums at Kalahari. 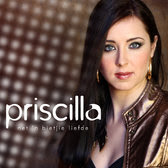 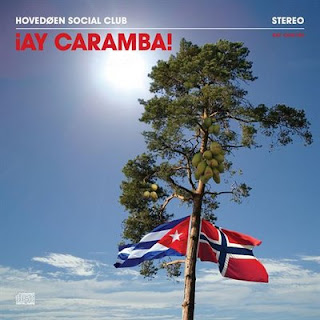 Noruega, Land Of Latin Rhythms.
Maybe this years Eurovision winner Fairytale by Alexander Rybak doesn't set your salsa* limbs in motion straight away and neither does any of the other Norwegian entries, but Hovedøen Social Club do a good job in bringing some latin flavours to the Norwegian classics.


Their latest (2nd) album ¡Ay Caramba! is a collection of songs in Norwegian in various Latin American music styles. And there's three Eurocovers, so I'm happy.

Voi Voi, Norway's first entry from 1960 (Nora Brockstedt) get a sizzling salsa makeover.
Romeo, Ketil Stokkans 1986 entry is a slice of merengue you can't sit still to and Lykken Er (1971, Hanne Krogh) is an off-beat bossa samba jazz exercise that goes a bit out of control halfway (in an artistic way of course). 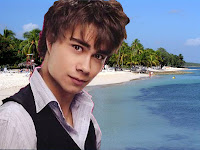 You can listen to all tracks of the album (and the previous one) in the musicplayer at http://www.hovedoen.no/. The album is for sale at CD-ON and other Nordic sources and also digital at http://www.musikkonline.no/. (C&C records CCD039).

* And if not salsa, I think there's a good ole country version hidden in Fairytale somewhere too, get to work Country coverbands.
Posted by Eurocovers at 8:50 AM 1 comment: 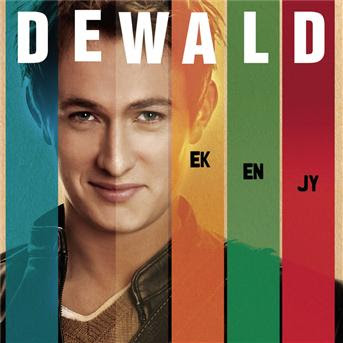 Here's another new South African release with a Eurocover. You don't find many Dutch entries covered in Afrikaans (except 1981 & loads of 1984) so it's a very nice surprise to hear Nooit Meer Sonder Jou, the Dutch 2007 entry On Top Of The World.

The original was the second entry for Edsilia Rombley, whose Hemel & Aarde from 1998 still is the best result for the Netherland in more than 30 years. On Top Of The World (in Dutch it was Nooit Meer Zonder Jou) didn't do as well, the song didn't make it to the final in Helsinki.

The singer is Dewald Louw, he's a South African Idols winner and has just released his 2nd album Ek En Jy (Me And You) on Sony/Vat 5 musiek. 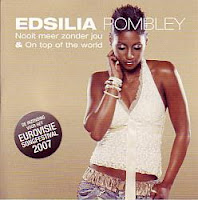 Dewald's 12 track album is a recommended well produced pop-rock record. It has Edsilia's song, an Arvingarna cover (Liefkry = Leva Lycklig) and a cover of Mika's Grace Kelly (in English) and also a number of original songs like the quite great first radiosingle Lekker Kry.

The CD is available at several South African webshops including Kalahari who ship internationally
I'm pleased that the album and/or seperate tracks are available as downloads through many sources (MTV, Mediagigant nl, Virgin fr and many more) and you can listen to the full tracks at MusicMe.