Don't Play That Song Again ended 16th in the 45th Eurovision Song Contest (in Stockholm).
Hold Me Now is the winner of the Brussels contest of 1987. It was Johnny Logans 2nd victory for Ireland.
One Step Further, originally by Bardo, ended 7th in Harrogate (1982)
And then there's Ding A Dong, the winner of 40 years ago. The Dutch entry by Teach In won the contest in Stockholm en became a European hit.

Nicki French shot to fame with her dance coverversion of Bonnie Tylers Total Eclipse Of The Heart.
It was already the third time Nicki released the song but the 1995 version became a worldwide hit.
It was a No. 5 in the U.K. and a No. 2 in the USA. It went to No. 1 in Canada, Japan and Brasil. 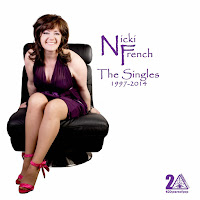 Earlier this year the album One Step Further was released including Matt Pop remix versions of the four Eurovision songs mentioned above.
Another recent release is the album Nicki French: The Singles 1997-2015.
Energise Records also offer a 4-disc (though CD-r) release with the albums One Step Further, The Singles 1997-2015, a Megamix CD and a 4th album Total Eclipse Of The Heart including two previously unreleased demo's.


Energise Records website
More Eurocovers Ding A Dong posts are here, and various versions of Hold Me Now are here.

Posted by Eurocovers at 8:16 AM No comments: