It's a small world after all. 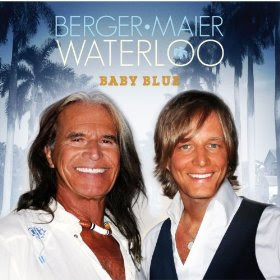 Some of us are old enough to remember 1976.
Austria's Eurovision entry My Little World by Waterloo and Robinson (Hans Kreuzmayr and Sepp Krassnitzer) finished a respectable 5th in the The Hague Eurovision Song Contest, won by the mighty Brotherhood Of Man.
Prior to their Eurovision result, Waterloo and Robinson already scored a few hits with Baby Blue and Hollywood, the latter reportedly even being a #1 in Brasil. 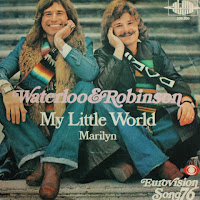 Waterloo and / or Robinson have re-recorded their Austrian #1 hitMy Little World several times, but since both their solo re-recordings from 2008 it has been a few years, so it's time for a new one.
(see below)

Das Comebackalbum
To cut a short story even shorter Schlagerfans, Das Comebackalbum is titled Baby Blue and is by Berger, Maier and Waterloo. So Waterloo = Waterloo (leatherfaceon the left), Berger = Ricky Berger and I guess Maier = Christian Maier, producer (but he's not in the picture, and neither is Robinson, who's probably occupied elsewhere).

The Baby Blue album will be released on November 23 and it will include new versions of W and R hits including Baby Blue, Hollywood and My Little World. It will also include a coverversion of the U.K. 1972 entry Beg Steal or Borrow (New Seekers) and  favorite Clout song Substitute (although the Righteous Bro's recorded it first, I know).
Excerpts are already up up up at Amazon.de.
BMW (oh....) have their Facebook.

Here's the list of recordings of My Little World by at least one of the original singers, maybe there are more, just let me know.
h
MY LITTLE WORLD (english) - Waterloo and Robinson 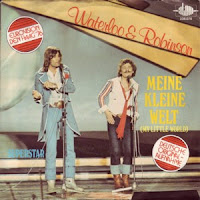 
Flemish Schlager
And some more release news from the cheesy variety. Laat Me Nu Gaan (Let me go now or rather Just let me go) is a single by Belgian Schlager singer Jo Vally. It's a coverversion of Non Ho L'Eta (Per Amarti), the 1964 Eurovision winner by Gigliola Cinquetti for Italy.
Don't know if there's a cdsingle, but the track is available at iTunes Belgium and possibly other sources.
Posted by Eurocovers at 1:49 PM No comments: