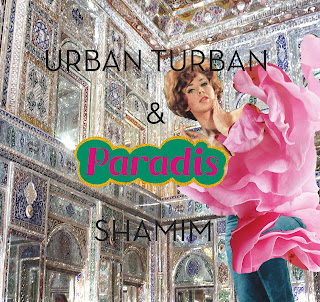 At Eurocovers we love something exotic. If you've perambulated through more than 10 years of Eurocovering you must have noticed some unusual coverversions from unexpected destinations.
Well, you can't get more exotic than this, from erm... Sweden.

Urban Turban and singer Shamim Naghedi released an album earlier this year titled Paradis. The Cd includes 12 Swedish classics* sung in Persian. It's not just Schlager with Persian lyrics, the music is filled with middle eastern mystique, hints of folk rock and all kinds of traditional instruments.

Now Urban Turban have been going for a few decades and it's mainman Peter Bryngelsson who remembers most of the tunes featured from his younger days. The Persian lyrics are by Shamim Naghedi and Safoura Safavi, both Iranian singers. 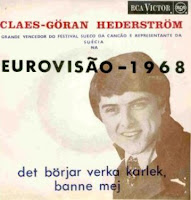 I'm not really an expert on the Swedish Classics outside Melodifestivalen, Abba and a bit of Cornelis, so I didn't recognise all the tracks on this album instantly.
But there are two Eurovision tunes that jump out. The closing track** is Det Börjar Verka Kärlek...Banne Mej, the 1968 Swedish entry by Claes Göran Hederström. (In Persian it's Engar Daräm Jedan Ashegh Mishäm)
The highlight is Ghäribe, Främling (Stranger), the 1983 Swedish entry by the High Priestess of Swedish Eurovision Carola.

The CD is out on Caprice records and of course also available through the digital platforms. Although not all may have the same tracklist (see below)
Here's the two Eurovision covers on Spotify, the full album is there too, just go check it out for yourself.

* I said Swedish classics, but there are a few that were already coverversion in their Swedish Classic disguise, more details below in the tracklist. 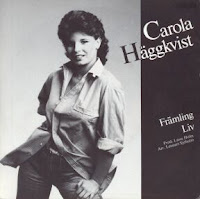 Links and sources
Utter thanks go to Frederick who spotted this and alerted Eurocovers.
I haven't been able to find much in the form of websites or facebooks but there is a good article here at Musikverket.se  where I nicked some of the info.
Caprice records at Musikverket
I Wiki'd and such for the details on the songs, so you don't have to.
You'll find more Carola covers here at Eurocovers.
An article about Tar And Cement is here at Eurocovers


Posted by Eurocovers at 4:25 PM No comments: