Eurovision 1990: Azucar Moreno - Bandido ...and then some 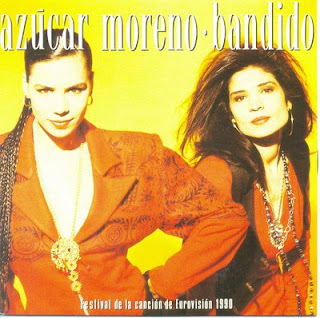 Another classic Eurovision moment: It's Zagreb, 1990 and Azucar Moreno are set to open the 35th contest with their groundbreaking (at least for Eurovision) Flamenco-House stunner Bandido (music by Raul Orellana & Jame Stinus, lyrics by José Luis Abel). But things go horribly wrong (Youtube).
After a long wait the backing tape finally starts but the Orchestra is still high on slivovits and they completely forget to play their parts. Sisters Toni & Encarna are not amused and walk off steaming. For a very long minute it's not clear if the sisters will return or if they are already running amok in the backstage area. But thankfully one of the favorites of the year gets a full airing and all is well in the end. Bandido only ends 5th and the winner is Insieme 1992 by Italian Toto Cutugno, who is dripping with black spray-on hairpaint when he walks on to carry the trophy home. 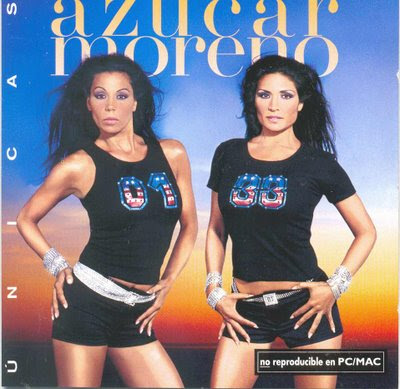 BEST BAND IN THE WORLD
Azucar Moreno are probably the best band in the world and since their breakthrough with the Bandido album (their 4th) they recorded 9 more. One is even more poptastic than the other and they are all highly recommended if you like passionate Flamenco- house crazyness and salsaflavored pop gems. And the occasional bonkers coverversion like Hava Nagila, Paint It Black or Tequila. Recommended personal favorites are Mambo (1991), Ojos Negros (1992), Amén (2000) and Bailando Con Lola.
Their success also spread to South America with a cover of Ven Devorame Otra Vez (Come and devour me again, 1990) and especially the El Amor album produced by Emilio Estefan (Gloria's hubby) in 1994. In 1996 they have a European summer hit with Solo Se Vive Una Vez (You only live once) from the album Esclava De Tu Piel (Slave to your skin).
Their most recent offering is Bailando Con Lola (2006), a tribute to Flamenco singer Lola Flores. You can listen to some of the tracks at their MySpace.
A selection of Azucar Moreno records for sale at BeaRecords

THE FUTURE
And there's good news, Encarna, who had been diagnosed with breast cancer last year is now declared cured. It's reported the girls are currenty working on their 14th album which should see the light of day at the end of this year. However other sources state Toni is working on a solo album and Azucar Moreno is on the backburner for a while.

SOME 2010 UPDATES (6-6-10)
Here's some great news on the best band in the world, Queens of the walk-off: Azucar Moreno. And their neices Alazan.
As you might know Azucars Moreno sisters Toñi and Encarna fell out big time after Encarna (the angry one) fell ill with breast cancer and Toñi (the bossy one) split up with her partner.
Things got really ugly but the girls seem to have made up (yay!!) and a new album is planned for the end of the year.  (well, make that somewhere in 2011 then)

Toñi Salazar has just released her new solo album Zero Azucar (!) which includes La Caña De España. That song was one of the many songs shortlisted in the Spanish national selection. (Youtube). It didn't make it to the final even though I voted for it…
Encarna released her solo album Desencuentro in 2009

Alazan
Meanwhile, Alazan, some nieces of The Moreno sisters celebrate their 10th anniversary with ditching a member* and releasing a compilation album 10.
10 includes a new version of the fabulous Alcanzaras La Luna from the 2000 Spanish final.
On the new version of Alcanzaras... you can hear and see Auntie Toñi and uncles Los Chungitos guest.
Watch La Caña de España here
You can watch the Alazan video here or listen to the new Alcanzaras here at Alazans homepage.
Source: Azucar Moreno Myspace (don't know if it's official or fanmade)

* actually, I don´t know when they became a duo

BANDIDO COVERS
Below there's a list of the coverversions of Bandido I know about and a few to listen to. Many are in Spanish although several of these are just cheap copies of the original song to fill MCs with even more cheap copies. 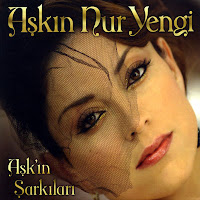 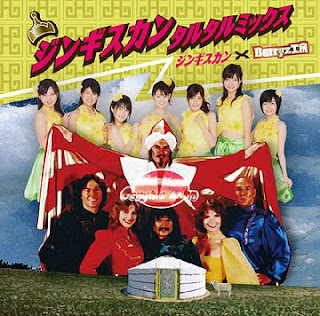 BERRYZ KOUBOU
Remember a few months ago Berryz Koubou released a cdsingle with their Japanese version of Dschinghis Khan. Great and all that, but now they have taken it a bit further and released yet another remix of the song. The Tarutaru mix mixes the Berrys Koubou version with the original German version by Dschinghis Khan themselves. In a totally hyper over the top fashion of course.

Now it would be a clever amateur mix-up, but actually it's the Koubou's latest released cdsingle. (King Records, available from cdjapan).

Even the picture sleeve is a remix.
Some youtubes feature the new mix. 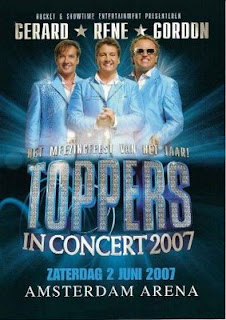 DE TOPPERS TO MOSCOW
And then there was the news of De Toppers as the Dutch entrants for Eurovision 2009 in Moscow.

The whole country is in uproar but the announcement restored the worldwide stockmarkets after last weeks devastating plunge.

Everyone seems to have an opinion on this surprising choice from the Dutch broadcaster, so I thought I'd let my light shine on it too.

De Toppers are René Froger, Gerard Joling and Gordon. Three filthy rich* singers who are able to entertain the masses with their no holds barred renditions of popular singalongs, torch songs and humpah classics. Their live shows are completely outrageous, and their wardrobe puts Dame Shirley Bassey's to shame.

Above all De Toppers are an immensely professional live act and no resources are spared to make their shows unforgettable. A preselection is planned on Februari 1st 2009, to select the perfect song for Eurovision 2009.
http://www.toppersinconcert.nl/

Gerard Joling represented the Netherlands in Dublin in 1988 with Shangri La, a typical 80's Eurovision song which ended 9th. Before that he already enjoyed a # 1 hit with Ticket To The Tropics and Eurovision didn't destroy his career as he scored his biggest hit with No More Bolero's in 1989. Joling also enjoyed popularity in Asia as well as in Belgium.
After 10 years of trying with really not so good records he scored another #1 with Maak Me Gek (drive me wild) in 2007 and with a duet with (un)dead André Hazes: Blijf Bij Mij (Stay with me)
Even though his records were crap from 1995 to 2006 he enjoyed a lot of popularity as a TV presenter and frequent guest in TV shows.
His corny OTT reality soaps with chum Gordon also filled the kitty and today Gerard Joling is hotter than ever. http://www.gerardjoling.nl/

Gordon tried to reach the Eurovision stage a few times, once as a poodle and once with a ballad. He enjoyed a #1 hit with his debut single and has also presented several TV shows. His one and a half braincell not in his pants has been put to use to cash in with his own line of clothing which makes even the thinnest people look obese. His hit songs with Re-Play were actually quite enjoyable. http://www.gordon.nl/

In the middle of the bitching bitches there's René Froger, calm, composed and heterosexual. Another #1 hit maker (also with his debut single) and a man able to fill a few stadiums every year. In fact is was his live show where Gordon & Joling guested that sparked the idea for De Toppers.
His current reality soap where he and his wife pretend to be poor for a month..... has raised some critisism, but I'm sure it'll all be blown over come Eurovision.
He released his first Dutch language album Passie a few months ago.
http://www.renefroger.nl/

TOPPERS EUROCOVERS
Next to some Eurovision medleys and live Eurocovers on DVDs each of the toppers have recorded at least two Eurocovers solo, which I won't upload here as their lawyers will be all over me in a second.

Gerard Joling
Ein Lied Kann Eine Brücke Sein (Germany 1975 by Joy Fleming)
- as Zing Met Me Mee (Dutch) on cdsingle (Bunny / Dino)Amsterdam (Netherlands 1980 by Maggie MacNeal
- on 7"inch single
Io Senza Te (Switserland 1981 by Peter, Sue and Marc)
- as Het Is Not Niet Voorbij, technically a Willeke Alberti cover. It was a top 10 hit a few months ago. on cdsingle and also on his latest CD Bloedheet. 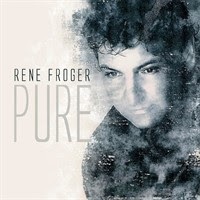 Why is it a good thing that De Toppers are going to Moscow ? OK, De Toppers don't Rawk! and I prefer my Diva's to be female, but I do think it's a good thing to send them to Moscow. Moscow is in dire need of a good gay injection and I doubt if Putin will hire his spitting nanny's** to disrupt the festivities (A Gay pride is planned in Eurovision week) , with all Euro eyes watching this time. I'm 100% sure De Toppers will give good show if they haven't killed each other by then. And I really hope they can find the right song. Money should be no object. Bring out the sequins, feathers and fur*** and paint the town all kind of colours, but mainly pink.

* They're probably the only Dutch artists who can afford to have a café latte frappiato in Moscows starbucks.
**Old ladies spitting at the people marching in the attemped gay pride in moscow turned out to be payed for by authorities. Allegedly of course.
*** although I regret they'll propably go out and kill the baby seals for it themselves.

BLOG TIPS
I recommended this blog before but Blowupdoll continues to amaze. Currently running a series of Francoise Hardy songs in English in the fh in english week.
Another blog I have mostly been enjoying this week is Zvuci Jugoslavije. Extensive delving in the Yugoslavian music archives, from pop to classical and of course including several posts about Eurovision artists and even some Eurocovers too.
Posted by Eurocovers at 9:02 AM