This year on January 9, Domenico Modugno would have celebrated his 90th birthday.
And on Februari 1 his Nel Blu Dipinto Di Blu (Volare) won the 1958 Sanremo contest.
Carosello Records and Edizioni Curci will launch a series of releases throughout 2018, to honor one of the greatest artists in the history of Italian music.

An exclusive vinyl single is released of Nel Blu Dipinto Di Blu (Limited edition of 1958 copies).
It features the original 1958 version and an instrumental of the 1967 re-recording.
The single comes in a black inner sleeve and also includes the sheetmusic. Nice!
(Fonit/Carosello 8034125 848027) 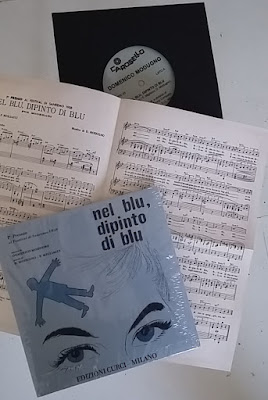 Some facts about Nel Blu Dipinto Di Blu (Volare)
The song was written by Domenico Modugno (music) and Franco Migliacci (lyrics). The most used English lyrics are written by Mitchell Parish.
The song was written in 1957 but was first launched at the eighth San Remo contest (Final Februari 1st) where it was performed twice. Once by Domenico Modugno and once by Johnny Dorelli.
Nel Blu Dipinto Di Blu won the San Remo song contest and Modugno represented Italy in the third Eurovision Song Contest in 1958 in Hilversum, The Netherlands on the 12th of March.

Modugno was a relative newcomer back in 1958 and didn't have a stitch to wear. He had to borrow the blue tuxedo he performed in.

The Eurovsision Song Contest was won by France's Dors Mon Amour by André Claveau and Modugno ended third with 13 points. 2 times 4 from Belgium and Germany and five times 1 point. And zero poing from Denmark and Luxemburg.

But Modugno laughed all the way to the bank, as his song , soon known as Volare (after the refrain) became one of the top 100 best selling singles of 20st century, a US #1 hit, A double grammy winner and one of the most covered songs with several lives in most decades since the original recording.
Volare won the first ever Grammy for a song in 1958.

Domenico Modugno went on to participate in Eurovision two more times. In 1959 with Piove (Ciao Ciao Bambina) and in 1966 with Dio Come Ti Amo.
Modugno also wrote the 1962 entry Addio Addio which was performed by Claudio Villa.
Domenico Modugno passed away in 1994 at the age of 66.

In 2008, when Volare was 50, Eurocovers ran a series of articles of the many coverversions of Volare. If you use this link you can find all Anno Domenico related posts.

Posted by Eurocovers at 6:16 AM No comments: