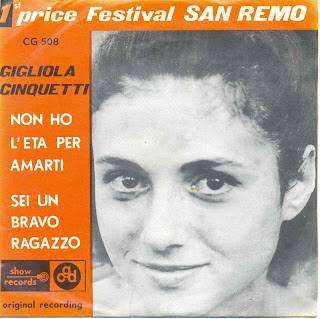 Eurovision fans know 1964 is the 'Lost Contest'. Until today all footage of the contest seems lost except for a few fragments. Danish TV (the contest was in Copenhagen) destroyed all light entertainment archives in the late 60's because they were branded uncultural and not worth saving. And somehow all the other TV companies have displaced their copies too.


Before the Eurovision victory Gigliola Cinquetti won the San Remo contest with Non Ho L'eta (Per Amarti) (written by Mario Panzeri & Nicola Salerno) together with Patricia Carli. (from 1957 to 1967 all San Remo songs were performed by two artists).


It was the start of a formidable career for Gigliola Cinquetti in Europe but also in South America and Japan. Non Ho L'eta was her breakthrough hit and she returned to Eurovision in 1974 where she finished second (behind ABBA's Waterloo) with Si. In 1991 she had the daunting task to restrain Toto Cutugno, her co-host in the chaotic Eurovision song contest at Cinecitta.
You can find a superb worldwide Gigliola Cinquetti discography at Big Cobra's site.

Too Young To Love?Several local legends recorded the song but the only worldwide superstar I could find is Vera Lynn, Sweetheart of the forces (47 at the time). Her English version was released on a 1964 single. (This Is My Prayer HMV POP 1287, 1964) which has just been issued on CD for the first time on a 2CD 'Vera Lynn - Singles Collection'.
Eurovision stars that have recorded Non Ho L'eta are Sandra Reemer (when she was 14 years old), Karina (at 20), Alice & Ellen Kessler (both 28), Grethe & Jørgen Ingmann (29 & 42), Mrs Einstein (Combined age 300), José Guardiola , Micky and Raquel Rastenni.

A word.doc with all versions (Cinquetti's and covers) listed is here. Versions in 20 languages are there including Chinese, Japanese, Vietnamese and Korean.
One of the nine Japanese versions listed is sung by Yukari Ito - 伊東ゆかり who performed in the San Remo contest herself in 1965 with the wonderful L'amore ha i tuoi occhi.
HMV Japan stocks a nice compilation of Yukari Ito's hits including Non Ho L'eta and Dio come ti amo. 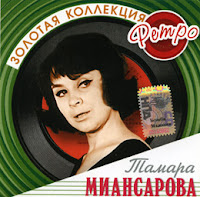 조애희 -나이도 어린데
A Korean version was recorded by Jo Aehee - 조애희 in the 60's and there's a later re-recording too.
I don't have many details but I do know the first version was on a various artists LP with a title somewhat like this: 이금희,박재란 외 - 오아시스 하이라이트 (or....) 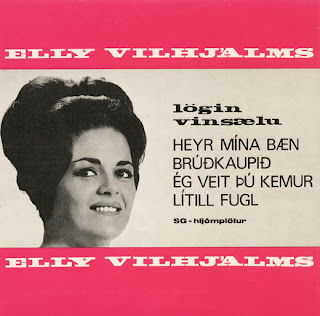 
The last version featured is by Ellý Vilhjálms (1935-1995) from Iceland.
Elly Vilhjálms was one of the most popular singers in Iceland in the 60's and 70's and she's still regarded as a national treasure. She earned her pedestal in the Icelandic music history gallery singing Jazz standards, Pop hits and national originals in Icelandic. A recommended CD compilation is Lítill fugl which includes Heyr mina bæn and Það er svo otal margt (A cover of All kinds of everything, Irelands 1970 winner)
The CD is available from various Icelandic CD shops and as a download from http://www.tonlist.is/ (English version is under construction though)

LOOKING FOR:
Actually I miss quite a few interesting versions of this song, most notably the one Tsin Ting (Jìng Tíng) 静婷- Aini Aini (Non ho l'eta) - Chinese on EP (Tae 142) from Hong Kong, probably sung in Mandarin.
Posted by Eurocovers at 10:18 AM

Though nowhere listed as being a cover of "Non Ho l'Eta," Elvis Presley's recording of "Please Don't Stop Loving Me" bears a remarkable resemblance (though the chorus is admittedly different). Numerous songs of European origin were passed to Elvis, who considered himself more a crooner than a rocker, so it is certainly not beyond the bounds of possibility that this happened with Gigliola's song, too. One could further speculate that, in order to avoid parting with more money than absolutely necessary, Tom Parker (Elvis's manager) made sure that as many traces as possible of the origin of the song were erased.