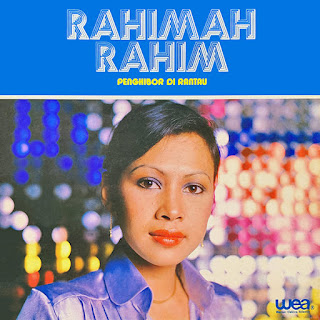 Last year Eurocovers started a series of Rotterdam Week coverversions to celebrate Eurovision being in The Netherlands and all that.
One version I couldn't find back then was this one, Penghibor Di Rantau by Rahimah Rahim from Singapore. But some kind person uploaded the album with the same name to the tube so you can have a listen to this lovely coverversion of Colorado, originally by Xandra (Sandra Reemer and band)
It was the Dutch entry in 1979 and Rahimah Rahim released her album in the same year.
(Below it is track 1, so it starts right away)
Alternatively you can listen to the album here at Muzik Nusantara.
In 1977 she already recorded Tepat Pada Waktunya which is a coverversion of the 1974 German entry Die Sommermelodie (Cindy und Bert) (LP Rahimah Rahim)
More Rotterdam Weeks Eurocovers Specials
- 바니걸즈 - 딩딩동,K-Pop avant la lettre
- Ragazzo di Piccola Città in una Grande Sala Giochi
- Dutch entries get a makeover (CD release)
- Someday, Morgen, Y Fori with Mary Hopkin
- A Dream Come True for Cilla Black fans
- Cristina Jorio - Come Una Volta
And you might like this too
- Tooong Tiki Tong, Fernando Filippo & Suzie

Posted by Eurocovers at 9:57 AM